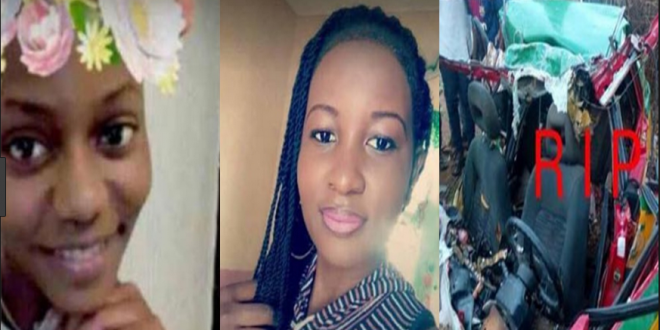 An accident which occurred along the Unilorin Teaching hospital, Oke-Ose, Ilorin, after a cab driver reportedly lost control of his car, allegedly claimed the lives of the driver, a corps member and two final year students of Kwara State Polytechnic who were going home after the day’s exam.

Few days ago, we reported that a Corps member,deployed to Lagos State for her service year and identified as only Debbie, was reportedly involved in a train accident in Ikeja area of the State, which according to sources left her dead and her body seriously mangled.

Leadership reported that the corps member was later rushed to the hospital for medical attention by some people, even though her case seemed hopeless. It was further gathered that the hospital where she was taken to, was kept secret by officials of the National Youth Service Corps (NYSC).

An eyewitness who spoke to a news correspondent said; The train was not moving at a high speed. People tried to call her attention to the incoming train but she didn’t yield to the call as she continued pressing her mobile phone.”

He also further stated that “I was looking at her from where I stood and saw her with an earpiece plugged into her ears which made her unable to hear the sound of the incoming train.”

Prince Mohammed Momoh, the Lagos state coordinator of NYSC, also confirmed the development to newsmen. Momoh had earlier announced that the corps member survived the accident, but later that she died while receiving treatment at the intensive care unit of the Lagos state University Teaching Hospital (LASUTH).
Momoh said: “We lost the corps member just now. I heard the neurosurgeon and the orthopaedic doctors said they would conduct further investigations on her. But regrettably we lost her.”

Previous Shocking!!! 42-Yr-Old Woman Caught Pants Down With Her 65-Yr-Old Father-In-law
Next Man Shares Girlfriend’s Nudes To Prove He Dated Her