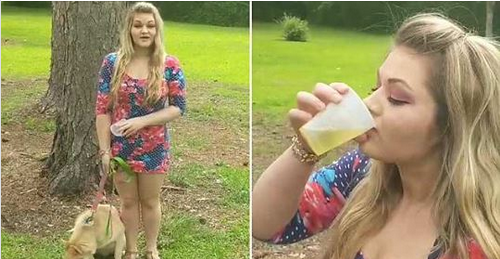 A woman has claimed drinking her own dog’s urine helped clear her bad acne .

‘Many of you have asked me how I always look so good, how my makeup always looks so perfect, or how I always have this natural glow,’ the unnamed American woman says in the clip.

Using a plastic cup, the woman collects urine from her dog before drinking it in full during the minute-and-a-half clip.

The horrifying video appears to be real after the woman is able to chug the cup of urine right after she collects it from dog.

‘Until I first drank my dog’s pee, I was depressed, I was sad, and I had bad acne,’ the woman says after finishing the cup.’Dog pee also has vitamin A in it, vitamin E in it, and it has 10 grams of calcium, and it’s also proven to help cure cancer.’

Drinking dog or human urine is known as urine therapy, and it was a practiced form of therapy in ancient China, Rome, Greece and Egypt.

But experts warn about the impact the substance can have on the health because of the toxins and acids that can reside in the urine.

She says that drinking urine from an animal could be an unsafe route for the body because what the liquid might contain.

‘Herbicides have been detected in dog’s urine, likely from herbicide-treated lawns, antibiotics, and hormones, so I really don’t know that it’s the safest choice,’ Joy says.