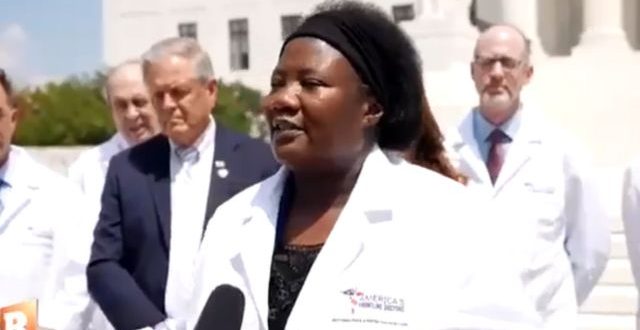 Dr Stella Immanuel believes Jesus will destroy Facebook’s servers after the site deleted a video in which she claims hydroxychloroquine cures coronavirus.

The Houston based pediatrician made headlines across world after President Trump retweeted the video, before it was removed from Twitter and Facebook.

Now Immanuel thinks God is poised to strike down the social media site.

She tweeted: ‘Hello Facebook put back my profile page and videos up or your computers with start crashing till you do.

‘You are not bigger that God. I promise you. If my page is not back up Facebook will be down in Jesus name.’

The video shows Immanuel and a group of other doctors standing in front of the US Supreme Court building for a ‘press conference’ on coronavirus.

In it, Immanuel claims that lockdowns and mask-wearing are not necessary to fight coronavirus, and that hydroxy is a ‘cure’ that is being suppressed.

Multiple global health bodies launched trials of hydroxychloroquine after French physician Didier Raoult claimed to have had success treating patients with it.

However, trials on seriously ill coronavirus patients were called off after it failed to improve survival rates and in some cases made them worse.

The World Health Organisation, which Trump has accused of helping to cover up the spread of coronavirus early in the pandemic, does not recommend it as a treatment.

However, Trump has touted hydroxy as a preventative medicine and claimed to have taken it himself for 14 days to stop him catching the virus.

Meanwhile Brazilian President Jair Bolsonaro filmed a video of himself taking the medication after testing positive for COVID.

Immanuel, who runs the Fire Power Ministries in a strip mall next door to her clinic in Houston, was born in Cameroon and did her medical training in Nigeria, The Daily Beast reported.

On her Facebook page she describes herself as: ‘Physician, Author, Speaker, Entrepreneur, Deliverance Minister, God’s battle axe and weapon of war.’

The church’s ‘beliefs’ section on their website – which has now been taken down – says they are against ‘unmarried couples living together, homosexuality, bestiality, polygamy, etc.,’

One sentence in the profile reads: ‘Her attitude toward demonic forces has been described as cut-throat, a warrior to the core.’

Immanuel is also a ‘wealth transfer coach’ and believes ‘you can be saved, anointed, fire brand and wealthy too.’

A mother of three daughters, Immanuel reportedly studied medicine in Nigeria between 1984 and 1990. 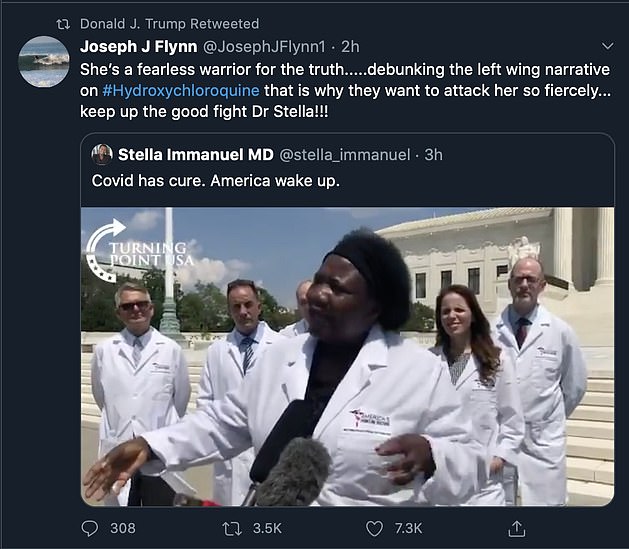