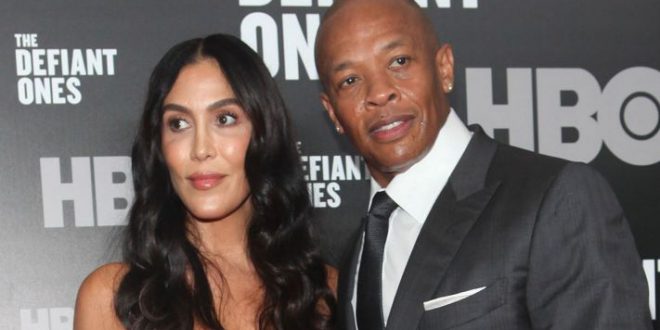 Dr. Dre and Nicole Young got married in 1996 and stayed together for 25 years until she filed for divorce last year

Dr Dre has agreed to pay his ex-wife Nicola Young a whopping $100 million (£74 million) in their divorce settlement.

The two have been stuck in a legal battle over the hip hop producer’s estimated $1 billion (£745 million) fortune as well as the prenuptial agreement.

TMZ has reported that the star will be paying his ex-wife $50 million (£37 million) now and the rest next year.

According to the publication, the NWA star will get to keep the seven properties the couple own, which include a Malibu home, two properties in Calabasas and four homes in the Los Angeles area.

He will also get to keep his master recordings, trademarks, Apple stocks (which include the proceeds from Beats by Dre sales) as well as interests in partnerships and trusts.

The former couple will have to divide their collection of cars, with the producer keeping six and Nicole taking four.

The publication reports that his ex-wife will get to keep the jewellery, cash and bank account she had during their time together.

A source also said that Dre is ‘delighted’ Nicole only gets a fraction of his estate.

Earlier this month, the Aftermath Entertainment CEO was pictured celebrating his divorce from Nicola.

A photo had been circulating social media of the beaming music mogul with celebratory balloons that spell out ‘Divorced AF’.

He is seen smiling in a long-sleeved white top with white trainers and dark pants as he sits proudly in front of the display.

Although Dr. Dre seems excited to put the nasty divorce behind him, it came out earlier this year that he was served with divorce papers while at a cemetery for the funeral of his grandmother.

There are conflicting reports of the incident, with the specific location he received the papers being up for debate.

Sources connected to Nicole have claimed that he was handed the papers at the car park following the ceremony.

News of their divorce was first reported in June 2020.

Dre has had a stressful year from his divorce to his home being the target for burglars.

At the beginning of the year, Dre suffered a brain aneurysm and was treated at Cedars Sinai Medical Center in Los Angeles.

He was rushed to the hospital by ambulance and was taken directly to intensive care.

The rapper and producer even shared an update with fans on social media and thanked everyone who sent him goodwill messages.