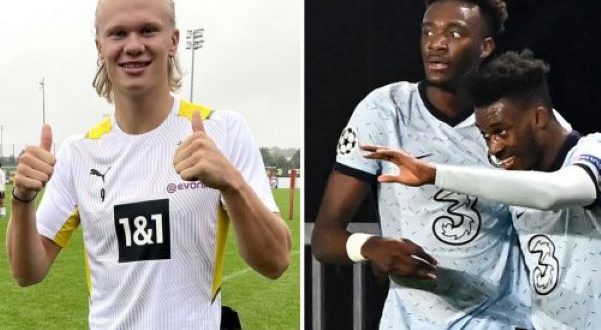 Chelsea have had a swap deal for Erling Haaland featuring Callum Hudson-Odoi and Tammy Abraham turned down by Dortmund, according to reports.

The Blues are infatuated with the Norwegian striker and are desperate to land him ahead of other suitors this summer.

According to Sky Germany, Thomas Tuchel’s side have offered to swap out of favour striker Abraham as well as winger Hudson-Odoi for Dortmund’s star asset.

But the Bundesliga side have turned them down.

Dortmund are reportedly hellbent on receiving an eyewatering £150million for Haaland this summer – despite a £65m release clause coming into play next year.

BVB have agreed terms with forward Donyell Malen, a potential replacement for Haaland.

But the Dutchman may well take Jadon Sancho’s vacated position in the team instead.

Haaland, 20, was all smiles this week after returning to pre-season training with Dortmund.

The Mirror claim that the Blues turned down offers for Abraham earlier this summer, as they believe he can be a key to tempting Dortmund into selling Haaland.

But that approach has not yet yielded results.

Chelsea are eager to sign a striker this summer after Timo Werner flopped last season.

They have also been linked with the likes of Harry Kane and Romelu Lukaku.

But Haaland is believed to be their overwhelming first choice.
Share