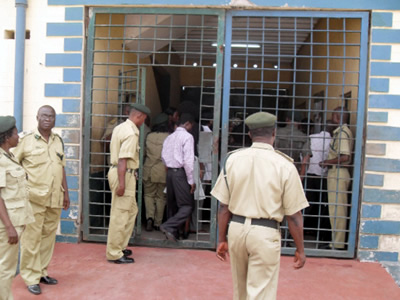 There was a mild drama at the Aguata prisons in Anambra State on Thursday when a prison inmate, Tobias Mbaekwe, who was discharged on health grounds by the state Chief Judge, Justice Petre Umeadi, refused to leave the prison premises as he begged the judge to allow him continue to stay in prison.

Mbaekwe, who hailed from Ozubulu in Ekwusigo local government area of the state, was among the three juveniles who freed on health grounds and delay in prosecution by the State Chief Judge, Justice Peter Umeadi. He collapsed on the floor shortly after the ruling that he would be granted bail, begging the Chief Judge to allow him stay back in the prison. According to him, his family members have ganged up to kill him because of a land meant for his father. He said he wishes to remain in prison where his life will be more secured.

“They said they will kill me if I come back home. They grabbed my father’s land after killing him in 1980. They latter kidnapped me and threatened to kill me and that is why they abandoned me here since 2012,” he cried out.

Justice Umeadi however directed the Aguata Prisons Welfare Officer to take him to the DPP of Ozubulu Police station who would in turn accompany him home.

Previous Why We Want To Sell Squareville – Peter Okoye
Next The Next Titan Nigeria Season 4: Kennedy Iyeh Wins N5 Million And A Brand New Ford Ranger