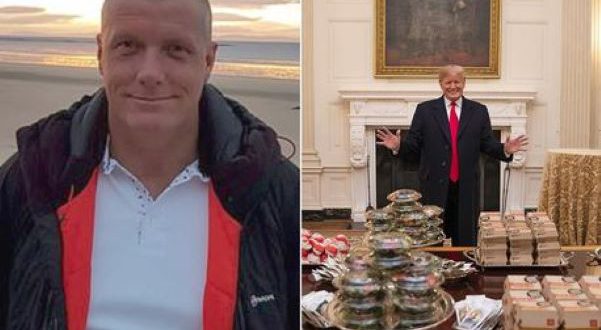 Donald Trump’s ex-bodyguard claims the former US President borrowed £95 to buy McDonald’s cheeseburgers, and never paid him back.

Kevin McKay, from Aberdeen, said his five years of working for the billionaire Republican ruined his life, with the stress of the job helping to end his 24-year marriage.

The 50-year-old Brit, who was a member of Trump’s Scotland staff until 2012, alleges he was forced to put up with the former POTUS’ rants and tantrums, including snapping at wife Melania.

And on one occasion in 2008, as they drove in a large convoy to Aberdeen airport after a visit to Trump International golf course, the fast food-loving mogul asked if Mr. McKay could foot the bill for a McDonald’s for everyone.

“We were driving from Mr. Trump’s estate and just as we got to the Bridge of Don, he asked to stop at McDonald’s so he could buy food for the flight back to New York,” the ex-bodyguard said.

“We were in a convoy of six blacked-out Range Rovers with about 15 men in suits inside, so there must have been some shocked expressions as we pulled up in the carpark.”

Mr. McKay said Trump didn’t have any UK currency so asked if he wouldn’t mind paying, on the promise he’d pay him back, and he agreed.

The order was 20 cheeseburgers, fries, and drinks.

The former President ordered his usual: two cheeseburger meals and a Diet Coke to take with him on his private plane, as Mr. McKay recalls.

“He told me he would pay me back, but he never did,” he explained. “For much of the time I was working for him, I kept thinking he would say, ‘Kevin, here’s that money I owe you,’ but it didn’t happen.”

Mr. McKay, who was fired in 2012, told the Daily Mail he was quite fond of Trump when he first started working for him but soon realised he’s “not a man of his word”.

The bodyguard recalled Trump browbeating contractors and intimidating landowners, while also battling to keep his famous blonde hair in place in the fierce Scottish winds.

And said the controversial businessman and politician rarely slept more than four or five hours a night, going to bed from 1 am to around 5 am.

He said Trump was a “bit snappy” with Melania and remembered a time she handed him a coffee and he responded: ”I don’t want that, we’ll talk about this later.”’