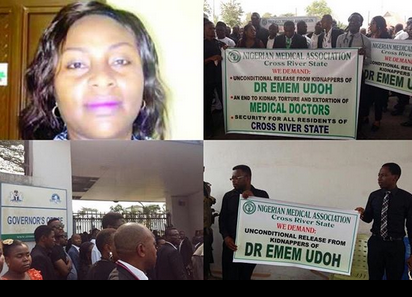 Doctors Protest As Kidnappers Abduct Another Colleague In Calabar

Dr. Emem Udoh, a Senior Registrar in the Department of Paediatrics, University of Calabar Teaching Hospital, has been abducted by unknown gunmen on Monday, while on duty in Calabar, Cross River State.
This came barely two days after another medical practitioner with the Cross River State College of Education Medical Centre in the Akamkpa LGA, Dr. Usang Ekanem, was released following his abduction on December 26, 2017.

There are indications that members of the state chapter of the Nigeria Medical Association may embark on an indefinite strike starting from Wednesday (today) in protest against the incessant abduction of their colleagues.

The Public Relations Officer of the state branch of NMA, Dr. Ernest Ochang, said, “This is to inform the general public, particularly those resident in Cross River State that another medical doctor was kidnapped on January 8, 2018.

This is coming after Dr. Usang Ekanem was suddenly released after we threatened a sit at home action. The young doctor was coming back from an extended duty of caring for children which is her passion and had to work beyond her schedule due to the few hands available in her unit.

We wish to inform Cross Riverians that this is one too many and a direct affront on our corporate existence. We took an oath to save lives and that much we must do. We pay tax and desire to live peacefully in the society.

This targeted attack on us is unexplainable. What is more worrisome is the quietness of government whose responsibility is to provide security for its citizens. It is our collective resolve to call government to act through whatever means that is at our disposal.”