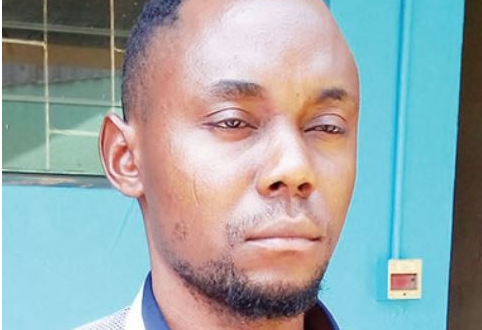 Emmanuel Anthony, who was recently dismissed by the army authorities at the 81 Division for impersonation, is in another trouble.

The 28-year-old after his dismissal was arraigned before an Ebute Meta Magistrate’s Court in April 2018 for posing as an army lieutenant to commit crime.

According to a reports, his photograph was reportedly spotted in the media by a man who identified him as a member of the gang that robbed him of a Lexus SUV on the Lagos-Ibadan Expressway sometime in February 2018.

The victim was said to have reported to the Assistant Inspector-General of Police, Adamu Ibrahim, at the Zone 2 Police Command, Onikan, Lagos, who recalled the Akwa Ibom State indigene from court. The Zone 2 Police Public Relations Officer, CSP Dolapo Badmos, during a parade of the suspect on Thursday at the command headquarters at Onikan, said Anthony confessed to the crime.

She explained that the suspect would also be charged with robbery. Badmos said, “On May 31, 2018, around 1pm, the Zone 2 Police Command through its Anti-Kidnapping Unit arrested a robbery suspect who was undergoing trial at the Ebute-Meta Magistrate’s Court where he was earlier arraigned in April 2018 for impersonating a Nigerian Army officer. The suspect and other members of his gang, also snatched a Lexus SUV sometime in February 2018 while posing as army officers. Efforts are ongoing to arrest his accomplices, who are on the run. As soon as investigation is completed, we will arraign him on robbery.”

The suspect said he deserted in 2016 after he was deployed to the North East to fight Boko Haram.

He explained that the fear of being killed by the insurgents made him ignore the posting. As a means of survival, he said he started escorting vehicles using his uniform, adding that he made a fake identity card to evade arrest.

“In February 2018, one of my friends, Agu, took me out in a car and we hit a motorist somewhere along the Lagos-Ibadan Expressway. It was in the daytime. My friend beat up the man because we both wore army uniform. I wore the rank of a lieutenant, which I bought for N1,500. My friend suggested that we should take the motorist to the barracks. As we pretended to be taking the car to the barracks, the man said we should take the vehicle. We turned around and took the car to my friend’s house at Ayobo, where he found a buyer who bought the car for N1.5m.”

He explained that when he was arrested for the car theft, he took the police to Agu’s residence and it was discovered that he had fled. Anthony denied knowing the address of the buyer of the car. “The army charged me with impersonation after I was arrested at Volks bus stop, on the Lagos-Badagry Expressway. They said I was a deserter and I wore a rank that was higher than mine,” he added.