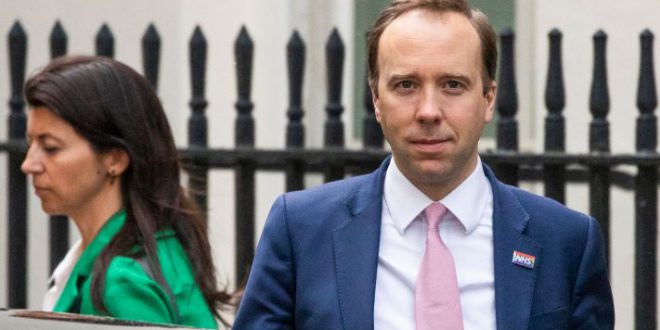 Matt Hancock has been left red-faced after the United Nations u-turned on appointing him as a special representative.

The former health secretary has made no secret of his wish to reboot his political career since he was forced to quit when he was caught breaking his own social distancing rules by kissing an aide.

On Tuesday Mr. Hancock proudly announced he was joining the United Nations in an unpaid role working to help African countries recover from Covid-19.

But his comeback has stalled as it’s emerged the appointment ‘is not being taken forward’.

The UN Economic Commission for Africa ‘has advised him of the matter’, a spokesperson added.

The withdrawal of the offer was welcomed by Global Justice Now, which said there’s another way Mr Hancock can

The campaign group’s director Nick Dearden said: ‘It is right for the UN to reconsider this appointment.

‘If Matt Hancock wants to help African countries recover from the pandemic, he should lobby the Prime Minister to back a patent waiver on Covid-19 vaccines.

‘If he’d done that when he was in government, tens of millions more people could already have been vaccinated across the continent.

‘The last thing the African continent needs is a failed British politician. This isn’t the 19th century.’

Mr. Hancock shared congratulations he received from a host of ministers, including Foreign Secretary Liz Truss and Culture Secretary Nadine Dorries, on his Twitter timeline.

But the timing of it was criticised as it came on the same day a damning report from MPs was published on how errors and delays by the government and scientific advisers cost lives during the pandemic.

In June, Mr. Hancock, who was married to his wife Martha at the time, resigned from his Cabinet role over kissing and embracing aide Gina Coladangelo (a university friend) in his office.

The under secretary-general of the UN, Vera Songwe, had said Mr. Hancock’s ‘success’ in handling the UK’s pandemic response is a testament to the strengths he would bring to the role.

According to the UN, African countries face paying more than £300 billion to recover from the pandemic.

Charles Igbinidu is a Public Relations practitioner in Lagos, Nigeria
@https://twitter.com/ionigeria
Previous Nigerian wins top 3 in Commonwealth-wide ideas contest
Next  ‘It is time to ask the question: Is Man Utd boss Ole Gunnar Solskjaer up to the job?’