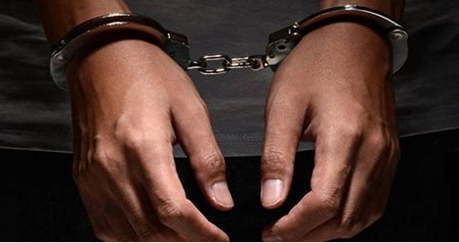 “I Have Disgraced My Family” – Armed Robbery Suspect Cries

Spread the love
An Ordinary National Diploma, OND, holder in Mechanical Engineering, Desmond Fadamitan, paraded alongside other suspected robbers by Ondo State Police Command yesterday, burst into tears, saying he has brought disgrace to his family.
Others paraded along with him are Olayemi Adeoye, the mastermind, and Roland Imafidon. Desmond told newsmen: “I regret my action.
I have made a big mistake in my life and I have brought shame to my family.” Asked to give details about his family members, the suspect said “I come from a much-respected family and I have brought shame to them,” but declined to say who is father or mother is.
However, it was gathered from a Police source that he is the son of an important personality.
The other suspect, Olayemi, a welder, when asked what pushed him into crime, said: “It is business now.”
Vanguard gathered that after stealing the vehicles, Olayemi disposes each for between N50,000 and N150,000 to Roland Imafidon, who then sells each for N300,000 to Desmond.
Desmond said he was not aware that they are stolen vehicles, but he was worried by the price they asked him to pay, noting that the market values of the vehicles were higher than what he paid the suspects.
According to Desmond, “I decided to relax after discovering that the vehicles needed some repairs. Some of them don’t have good tyres and shock absorbers. “I will have to do some repairs and also spend some money before disposing them.”
Parading the suspects, the state Police Commi-ssioner, Olugbenga Adeyanju, said the vehicle of one Mrs Bukola Olamide, a Honda CRV, number plates MUS 437 EL, was stolen at a commercial bank in Akure on November 28, 2017.
Share