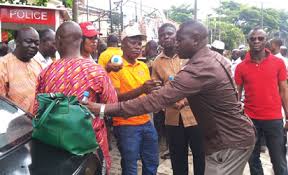 The National Industrial Court, Abuja, has fixed Sept.26, to hear the case of Felix Adariku and 256 other disengaged workers’ of the Total Exploration and Production Company.

The aggrieved workers had sued the company over alleged unlawful dismissal from the company.

The workers alleged that they were laid off in August 2015 without notice.

Ukana, who is the General Services Coordinator, of Total Exploration Company, had told the court to adopt his witness statement on oath as his evidence in the suit.

The claimants are also seeking for an order of the court for the respondents to pay them N8 billion, being salaries and arrears that accrued since 2015 till date.

They also prayed the court to prevail on the respondents to pay N5 billion for the unlawful termination of their appointments and general damages.

The claimants joined Eastbay Trade and Logistics Nigeria and Gobin Security Limited in the suit.

The first respondent, Total Exploration and Production Company, was represented in court by Mr Inam Wilson.