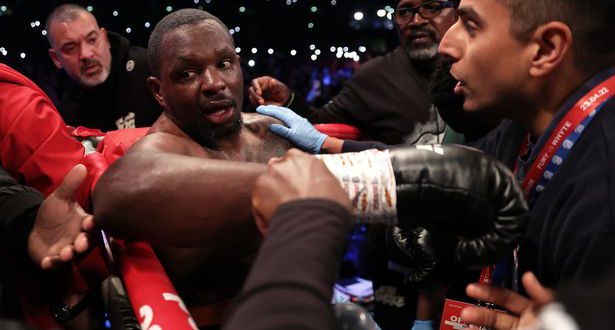 Whyte has spoken out for the first time since being knocked out by British rival Fury, claiming he felt he was not outclassed but pointed out one “slip” that led to the brutal knockdown

Dillian Whyte has spoken out for the first time since his brutal sixth-round stoppage defeat to Tyson Fury at Wembley Stadium.

The ‘Body Snatcher’ ended his wait of over 1700 days to challenge for the world title against the champion in front of a record 94,000 crow. However, a stiff uppercut from Fury landed in the sixth stanza which sent him to the canvas and he was unable to recover which handed Fury his latest victory.

Whyte has now admitted that one big slip led to the uppercut that ended the fight but he felt the rounds were close before the stoppage. He told BBC Radio: “There wasn’t a lot in it – it was a close fight and I didn’t feel like I was outclassed in there. My game plan was to press him and start moving forward. I was trying to attack but one slip and I got caught with the shot.

“He’s a big awkward guy – I was expecting that. It was always going to be an awkward fight, but I was trying to set up and be patient and land what I could early and from round three onwards start to press. It was a good learning experience.”

Whyte’s future now looks uncertain after facing being frozen out of the world title picture for the first time in several years after missing out on the opportunity to snatch the coveted WBC crown. He remained respectful to his rival throughout the fight build-up and came into the fight as the significant underdog

The uppercut came in the sixth round with Whyte unable to convince referee Mark Lyson he was able to continue, after stumbling desperately across the ring in an attempt to beat the count with one second left until the halfway point. Despite the brutal nature of the defeat, Fury has backed his rival to return to the ring better than ever and become world champion.