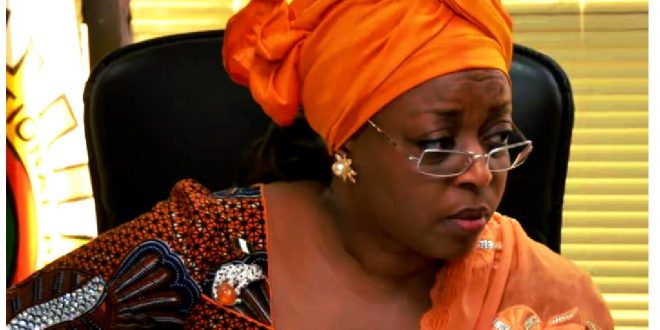 A Federal High Court Lagos on Thursday ordered the final forfeiture of the sum of N34 billion (153 million dollars) linked to a former Minister of Petroleum Resources, Mrs Diezani Allison-Madueke.

Justice Muslim Hassan issued the order while delivering judgment in a suit by the Economic and Financial Crimes Commission (EFCC) seeking the forfeiture of the money as proceeds of crime.

The News Agency of Nigeria (NAN) recalls that Justice Hassan had on Jan. 6 issued an interim order of forfeiture of the sum of N34 billion to the Federal Government following an ex parte application by the EFCC seeking a similar relief.

The EFCC had initiated an ex-parte application, seeking an interim order for the temporary forfeiture of the sum to FG which it claimed was linked to the ex-Minister.

Also joined in the suit was Mr Dauda Lawal as respondent.

The court had also issued 14 days to any interested party to appear and prove the legitimacy of the money failing which the money would be permanently forfeited to the government.

At the last sitting of the court on Jan. 24, Mr Rotimi Oyedepo and Mr Charles Adeogun, Counsel representing the EFCC and the respondent (Lawal), had argued their originating processes before the court.

Oyedepo urged the court to make the interim order absolute and ordered a final forfeiture of the sum to the Federal Government of Nigeria.

He also urged the court to order the forfeiture of other sums to which no claim had been laid.

In his argument, Adeogun urged the court to issue an order, directing a refund of N9.08 billion to the second respondent on the grounds that it was obtained by coercion.

He argued that before such forfeiture orders can be made, two essential elements must be satisfied; namely — “that the property in question is unclaimed, and that such property or funds formed proceeds of an unlawful act.

Justice Hassan, in his judgment, ordered a final forfeiture of the unclaimed sum of N23. 43 billion and $5 million to the Federal Government.

“I hereby make an order pursuant to Section 17 of the Advanced fee Fraud and other related Offences Act 2016, for final forfeiture of the unclaimed sum of N23, 426, 300, 000.00 billion and 5 million dollars to the Federal Government finally.

“I have carefully examined the affidavit evidence before the court and I find that the second respondent was duly cautioned in English language before his statement was taken and so, I hold that same was taken without any evidence of inducement.

“On the whole, I am satisfied that all the conditions stated in Section 17 of the Advanced Fee Fraud and other Related Offences Act, was duly fulfilled by the applicant.

“I accordingly make the following orders — An order for the final forfeiture of the sum of N23, 426, 300, 000.00 billion being unclaimed property to the Federal Government of Nigeria.

“An order of final forfeiture is also made for the sum of N9.08 billion recovered from the second respondent to the Federal Government of Nigeria, this is my judgment,” he said.

Before the judgment, Adeogun had informed the court of two of his pending motions filed on Feb. 3 — the first seeking an abridgement of time and the second, for leave of the court to file further affidavits to his counter- affidavit.

He told the court that parties were exploring means of reaching amicable settlement in the matter.

He described it as a common sense approach to resolving the matter, adding that the sum recovered from the second respondent and sought to be finally forfeited, were “gathered from friends and relatives.”

Adeogun added that the facts were not made available to the court at the last adjournment because the instruments with which the funds were paid were still with the commission.

In response, Counsel to the EFCC, Oyedepo said he was not privy to such settlement options, adding that he was only sent to do the “bidding” of his employers.

He said: “If the intention of the respondent is to keep the application in the court’s file in abeyance, I will then pray the court to strike out the applications relying on the authorities of SIEC Ekiti State vs NCP, Newswatch communications Ltd vs Attah and Manuel vs Briggs.

“The applications the counsels seek to put in abeyance is intended to arrest the court’s judgment fixed for today.

“In all these, the court had held that it is alien for the court to allow its judgment to be arrested once reserved.

“It is just like a pregnant woman in the delivery room, getting an invitation to attend a wedding ceremony; in essence, the court is carrying a pregnancy and so, no party should be allowed to terminate it.

“The court had given parties adequate time for anyone to complain of rights infringement and so I urge the court to strike out the application so that the coast can be clear to deliver judgment.”

The judge, in a short ruling, allowed the second respondent’s counsel (Adeogun) to move his application and thereafter dismissed the application and proceeded with the judgment.