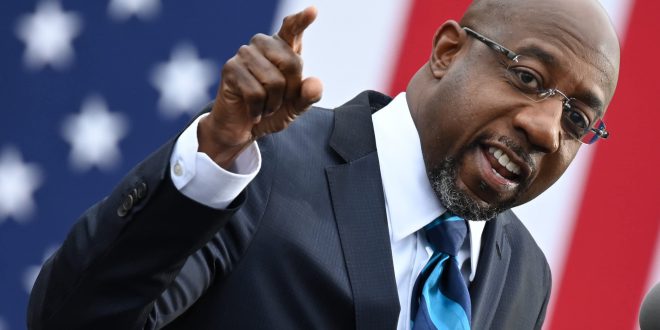 Raphael Warnock on Wednesday morning was projected to have defeated Sen. Kelly Loeffler (R) in their Senate runoff in Georgia, bringing the Democrats within reach of the majority in the upper chamber.

All the major networks called the race for Warnock shortly before 2 a.m. ET on Wednesday. The Associated Press called it at 2 a.m. ET.

Warnock, who is the pastor of the Ebenezer Baptist Church in Atlanta, will be the first African American to represent Georgia in the Senate.

The pastor declared victory in a video address after midnight on Wednesday.

“We were told that we couldn’t win this election, but tonight we proved that with hope, hard work and the people by our side, anything is possible,” Warnock said. “So Georgia, I am honored by the faith that you have shown in me and I promise you this tonight: I am going to the Senate to work for all of Georgia, no matter who you cast your vote for in this election.”

Warnock will be up for reelection in 2022 because the race was a special election.

Loeffler showed no signs of conceding in the race earlier on Wednesday, calling for every vote to be counted.

“It’s worth it for this election to last into tomorrow. We’re going to make sure that every vote is counted,” she said prior to the race being called. “We have a path to victory and we’re staying on it.”

Neither Loeffler nor Warnock reached the 50 percent threshold needed to win the general election in November, sending the race into a runoff. Warnock, who benefited from then-Rep. Doug Collins (R-Ga.) running in the nonpartisan blanket primary alongside Loeffler, garnered roughly 33 percent of the vote at that time. Loeffler brought in around 26 percent.

However, with the Republican side consolidated, polls showed a tight race leading up to Jan. 5. The Real Clear Politics polling average showed Warnock leading by just 1.8 percentage points on the Monday before the runoff.

Warnock criticized Loeffler over her initial lack of support for the $2,000 stimulus checks for Congress’s coronavirus relief package in the final weeks of the campaign.

Loeffler eventually came out in support of the checks after Trump hit Congress for including $600 stimulus checks instead of $2,000. But Warnock still hit Loeffler for not pushing hard enough for a vote on the checks.

“Instead of flying back to Washington, D.C. and insisting that they put up the stimulus [bill] for a vote, Kelly Loeffler was so busy trying to keep her job that she’s not doing her job,” Warnock said at a rally on Riverdale, Ga., on Monday.