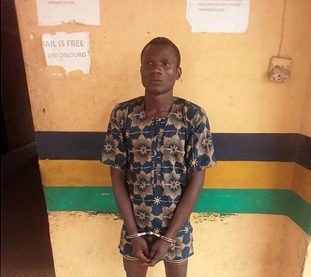 One Andrew Koku is now in police custody for allegedly killing his six months old daughter, Precious Koku, on Christmas eve, in Obada place, of Ogun State.
He became arrested by police detectives connected to Adigbe Divisional Police Station, following a complaint by way of his wife, Omowunmi Teleda.

The mother of the dead child changed into stated to have long gone out on a visit to her child she had for her ex-husband and came back to see her child lifeless.

Teleda, in line with a statement by the State Police Public Relations Officer, Abimbola Oyeyemi, was said to have confessed to the crime. The suspect claimed that he deliberately killed the child due to the fact he was suspecting his wife of wanting to go back to her ex-husband.

The assertion stated, “The suspect confessed to the crime, however, claimed to be suspecting that his spouse desired to leave him for her ex-husband and that if that need to show up, he’ll now not be able to take care of the infant and that turned into the cause why he decided to eliminate the kid.”