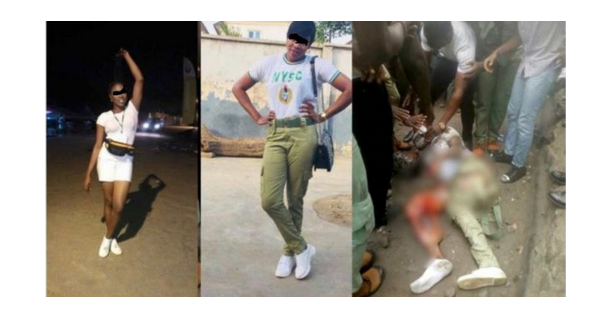 A yet-to-be-identified female Corps Member has been reportedly killed by a train at Ikeja, Lagos.
According to an eye witness, amiableangela who reported it on social media, the deceased was standing on the rail track, oblivious of the fast approaching train.

The train had as usual, sounded its horn repeatedly as it was approaching, but the lady was apparently didn’t hear as she had ear piece blocking her hear.

“A pregnant Youth Corper that was going to Ikeja local government. She blocked her ear with eyepiece and didn’t hear when people were shouting. A guy ran and dragged her out but it was too late, d train cut of her side of d body. She was rushed to hospital don’t know if she survived”

Another eyewitness Peace Tina said : “It happened yesterday at Ikeja rail way beside the Local government. The deceased who was  a Corp member returning from her CDS was using her earpiece and did not hear the sound of  an oncoming train. A man tried pushing her away but couldn’t and the train crushed her” she wrote.

It was gathered that policeman and a few other persons who had gathered around were seen making calls obviously to the appropriate authorities for the needed assistance.

Recalled that a similar incident happened on February 13, 2018 when a man identified as Fatai was crushed to death by a train in Ikeja area of Lagos State at about 9.00 a.m.

Previous There Is Nothing Wrong In Stealing, Selling Cars For N50,000 – Suspect
Next Welder Breaks 13-Year-Old Apprentice’s Head With Padlock