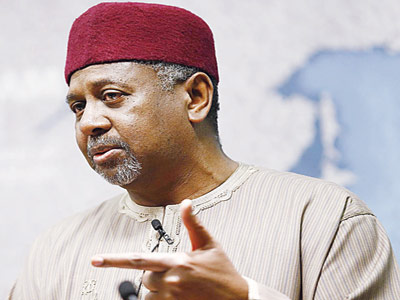 Former National Security Adviser (NSA) Colonel Mohammed Sambo Dasuki (rtd) has told a federal high court in Abuja that he is being punished by some persons at the highest level of power in the country for perceived grievances they hold against him while in active military service many years ago.

Dasuki who did not name any particular person said that the punishment being meted on him was unfortunate having borne out of mere vendetta.

In an emotion laden submissions while reacting to the government request for his secret trial, Dasuki who spoke through his counsel Mr. Joseph Daudu SAN told the court that he has rested his case in God for the ultimate judgment.

“It is crystal clear that the defendant (Dasuki) is being punished by the powers that be for the perceived offences committed long before… we leave them to the Almighty God for his ultimate judgment”.

Dasuki had been arraigned before three different high courts for various allegations and was granted bail but was rearrested in December last year by the Federal Government and has since been held incommunicado.

At the resumed trial today, the Federal Government had approached the court, seeking secret trial of Dasuki who is facing charges of unlawful possession of firearms, money laundering and breach of trust.

In the fresh motion argued by the prosecuting counsel, Chief Dipo Okpeseyi (SAN), government prayed the court to allow witnesses give evidence behind the screen to be provided by the court.

He held that the request hinged on the fact that Dasuki as a former top security chief has large loyalists across the country who may jeopardize the trial if done in the open.

He further submitted that Dasuki has in the recent past held the highest security office in the country and has loyalists in the security circle whose loyalty has been transferred to personality and whose actions might be inimical to prosecution witnesses some of whom are still in the service.

Okpeseyin cited the case of the government witness who was involved in a serious accident, resulting in multiple fractures and injuries but however stated that in as much as he would not allude that Dasuki has a hand in the accident, it heightened the need to have the witnesses protected by the court.

He further submitted that in the highest military office where Dasuki served last, loyalty was the first, second and the last rule and because of the peculiar nature of loyalty some persons have for him within the military and beyond, those to give evidence in the trial were at one time or the other, staff of the defendant.

He stressed that since the witnesses are those of the court whose primary duty was to assist the court arrive at a just conclusion, the issue of security must be viewed with a serious concern.

He therefore urged Justice Adeniyi Ademola to screen the witnesses from the public in the interest of justice, and to protect them, their families and career.

But Counsel to Dasuki, Joseph Daudu (SAN), vehemently opposed the request for secret trial of Dasuki.

His argument was that it will breach the principle of fair trial.

He added that contrary to the position of the government, Dasuki cannot be a threat to the witnesses as he has been in the custody of the federal government since December last year.

Daudu argued that open trial is the minimum requirement in a criminal trial and as such, any attempt to opt for a secret trial in the instant case, which was not a capital offense will run contrary to Section 36 of the 1999 Constitution on fail trial.

The Defence counsel therefore asked the court to discountenance the claim made by the prosecution on the issue of loyalty in the military circle, stressing that such claim was a mere speculation and not backed up by facts.

On the accident of the witness, Daudu told the court that the accident would not have been caused by Dasuki, who has been in the government custody for almost a year.

He said that the alleged accident has no bearing with the request for secret trial.

He therefore urged the court to dismiss the application for secret trial as such will trample on the rights of the defendant to fair trial.

Justice Ademola after taking argument from both parties fixed ruling and continuation of trial for September 13, 14 and 15.