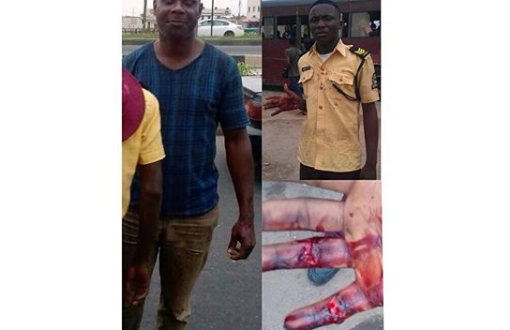 A commercial bus driver, Kenneth Anyanwu, has been sentenced to one year imprisonment by a Lagos State Mobile Court sitting in Oshodi, for stabbing a Lagos State Traffic Management Authority (LASTMA), official, Olanrewaju Yusuf.
Magistrate F.O. Ikobayo convicted Anyanwu following his plea of guilty to a two-count charge of assault and breach of peace. She sentenced him to one year imprisonment or a fine of N50,000.

Yusuf attempted to arrest Anyanwu for picking passengers at undesignated bus stops between Obanikoro and Palm Grove. But Anyanwu resisted. He picked a broken bottle and aimed for Yusuf’s neck, but Yusuf raised his hand to parry the blow and was slashed in the process.

Previous Woman Shot Dead By Soldier Husband For Having Affair With His Boss
Next Lord’s Chosen Pastor, Benedict Mgdire Defrauds Businessman Of $38,000