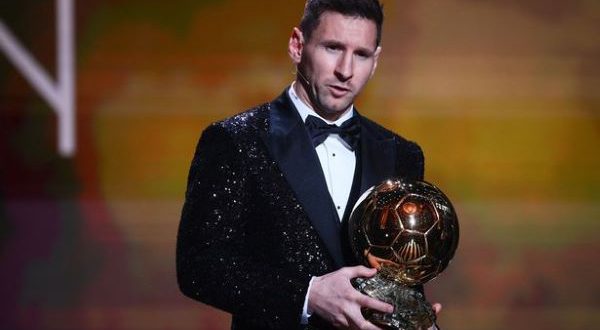 The Paris Saint-Germain player scooped the 2021 accolade to add to his collection of individual trophies – two more than Cristiano Ronaldo.

Yet the decision to award the Argentine the gong was not without controversy with many prominent voices across football criticising the decision.

Messi was joined on the podium by Bayern Munich striker Robert Lewandowski and Chelsea midfielder Jorginho – who won the Champions League and European Championships this year.

The voting panel’s decision to overlook Lewandowski for the award has drawn the most criticism, after the Poland international was also denied the award last year due to the event’s cancellation

Lewandowski has scored 128 goals since the start of the 2019/20 season of which 29 have come in 21 appearances in the Champions League, while bagging 25 times in 20 outings this season.

Among those leading the criticism was Real Madrid midfielder Toni Kroos, who said after the decision: “It is absolutely not deserved.

“There is no doubt that Messi, with Cristiano, has been the player of the last decade, but this year there should’ve been others ahead of him.”

Kroos was joined by his former Los Blancos teammate Iker Casillas, who also highlighted Messi’s longevity and brilliance but questioned whether he deserved this year’s gong.

Casillas wrote on Twitter : “It is increasingly difficult for me to believe in football awards.

“Messi is one of the best but you have to know who is the most outstanding player after the season. It’s not that hard.”

While there was criticism in Spain, there was more of a pushback in Germany – where the award’s 1990 victor Lothar Matthaus blasted the decision to overlook Lewandowski.

“With all due respect to Messi and the other great players named, none deserved it as much as Lewandowski.

“France Football didn’t award the prize last year, and if only because of all the titles that Robert has won with Bayern 2020, he is unrivalled not only in the last two years.

“But even if you only take 2021 into account, he was better than the rest.

“He broke Gerd Muller’s record of the century, is again top of the top scorers list in every competition and has surpassed everyone nationally and internationally this year as well.”

Oliver Kahn, Bayern CEO, who appeared twice on the Ballon d’Or podium, added: “Lewandowski would have deserved both the Ballon d’Or and his top scorer trophy because he has performed absolutely at the highest level for years.

“Even without the Ballon d’Or, Lewy made it to the Olympus of soccer greats a long time ago.

“He will continue to be a candidate (for the Ballon d’Or) in the coming years.”

There was also criticism of Messi’s award in Europe’s leading sports paper, with German newspaper Bild the most vocal

“This can not be true,” their Tuesday edition read “It is a scandalous choice.”

Italian newspaper Corriere dello Sport chimed in with the criticism, calling the award ceremony ‘a farce’ on their front page for Tuesday.

Messi’s award this year certainly has divided opinion with Lewandowski missing out again despite his exploits.