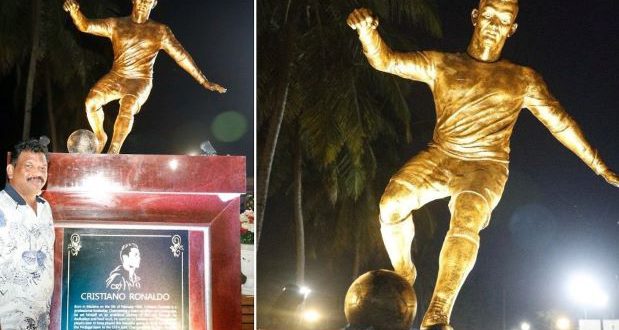 Placed in the western Goa state, where football is hugely popular, officials hope it will inspire young people.

But Goa is also a former Portuguese colony, and it is 60 years since the state was liberated from Portugal.

Critics say local football players should have been honoured, especially since several past and present members of India’s national team are Goan.

“Very disappointed to hear of the statue of Ronaldo being erected. Learn to take pride in our own icons like Samir Naik and Bruno Coutinho,” a local Goan told the IANS news agency.

During the statue’s inauguration, some people waved black flags in protest, the Times of India newspaper reported.

Portugal’s football team is popular in Goa, and due to its colonial past, many locals have lived in Portugal or have family there.

But some people in the Indian state feel it is insulting to install the statue during the 60th anniversary celebrations of Goa finally gaining independence from Portugal, which happened 14 years after the rest of India was liberated from British rule

“To erect a statue of a Portuguese footballer this year is sacrilegious. We condemn this,” IANS quoted right-wing activist Guru Shirodkar as saying.

“There are many freedom fighters in Goa who have been insulted,” he added.

Michael Lobo, a local lawmaker in the governing Bharatiya Janata Party (BJP), tweeted a photo of himself with the statue, saying that it had been installed “at the request of our youth” to inspire them “to take football to greater heights”.

Although cricket remains India’s most popular sport, football – especially the English Premier League – is a favourite in certain pockets of the country – Kerala in the south, Goa in the west, West Bengal in the east and all of the eight north-eastern states.

Footballer Cristiano Ronaldo's statue installed in Panaji, Goa. To inspire youth &take football to next level in the state, country, we came up with this statue. We want our children to become like this legendary footballer, who is a global legend:Goa Minister Michael Lobo(28.12) pic.twitter.com/KthPHc7ox0

Cristiano Ronaldo, who currently plays for Manchester United, is adored by many fans and widely regarded as one of the best players in the history of the game.

The 36-year-old forward has not commented publicly on the statue.

This is not the first time a statue of him has raised eyebrows – in 2017 a bust of Ronaldo was widely mocked and eventually replaced in Madeira airport in Portugal. 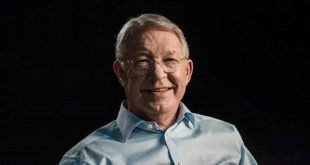