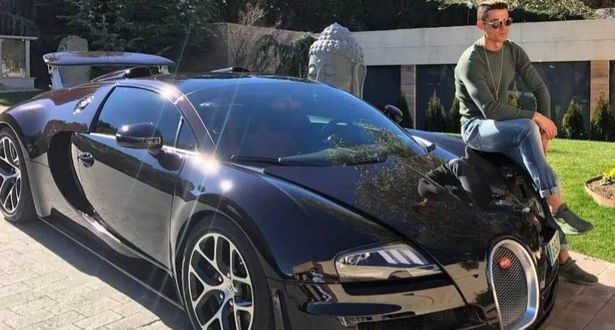 The Portuguese forward, 36, is believed to be a huge fan of luxury cars and boasts a fine collection of motors.

According to The Supercar Blog via German outlet Bild, Ronaldo has ordered the stunning Bugatti.

Bild did query the rumour with the Italian manufacturer but they were unable to comment.

Only 10 versions of the vehicle have been made, making it one of the world’s most exclusive motors – with each unit hand built in Bugatti’s Molsheim factory in France.

The Bugatti has an eight-litre W16 engine, with special models having an incredible 1600hp.

Cristiano Ronaldo has bought a Bugatti Centodieci, according to reports

Bugatti’s official description of the motor reads: “Inspired by the historical model, the Centodieci pushes all boundaries of imagination with its breath-taking performance and pioneering design.

The limited edition motor is believed to be worth £8.5million

“Featuring a modern interpretation of the classic wedge shape and with the iconic W16 engine, the Centodieci transports the EB110 gracefully into a new millennium.

“The ten limited-edition vehicles are distinguished by their perfect elegance and sculptural beauty, making the Centodieci a true, tangible work of art.”

Ronaldo already has a fleet of supercars, shipping them from Turin to Madrid in May – just a few months before he left Juventus.

He recently added a £164k Bentley to his collection, which is believed to be worth around £17million.

Ronaldo was rumoured to have bought a one-off Bugatti La Voiture Noire in 2019, reportedly one of the world’s most expensive cars at £9.49m.

And he was recently seen arriving at Manchester United’s Carrington training ground in a £170k Lamborghini Urus.

Ronaldo honestly admitted on the Jonathan Ross show last year that he didn’t know how many cars he had.

He also joked he plays games with his five-year-old son, after picking him up from school in a Rolls Royce, where he asks which car is missing from the garage.

Ronaldo isn’t worried about his son being spoilt though, he said on the ITV chat show: “It isn’t easy but for me, in my mind, it is all about education. If you give him education he will be strong and he will appreciate the things.

“I can’t avoid showing him good cars, houses and a good quality of life. I have to teach him that daddy worked hard for this house and car.”