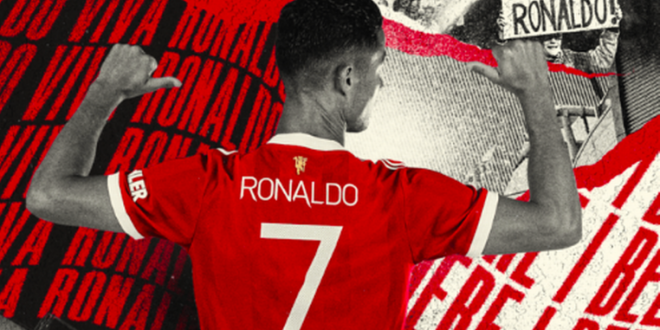 Fans queued up outside Old Trafford to get their hands on the ‘Ronaldo No7’ shirt – and records have already been broken before he has kicked a ball.

In just four hours following the announcement that Ronaldo would wear the iconic shirt, United’s online store surpassed the highest day of sales ever on a single sports merchandise site outside of North America.

The club’s online shop is run by Fanatics, who work with more than 300 clubs around the world and top sports leagues.

The first hour of sales alone surpassed the best ever full day of global sales for United Direct, the official club merchandise site.

Across the Fanatics network, Ronaldo became the biggest selling player ever in the 24 hours following a transfer to a new club.

But some United fans just wanted to head down to Old Trafford to hand over their cash in the official club shop.

Edinson Cavani agreed to let Ronaldo have his old No7 shirt back Credit: Manchester United FC
One disabled superfan even had a Ronaldo montage on the wheel of her wheelchair, beaming as she held her new shirt.
It comes as Ronny flew in by private jet for his Manchester United return — and set up home in a stunning multi- million pound mansion.

The Portuguese superstar’s plane touched down at the city’s airport at 5.40pm on Thursday after travelling from Faro.

He was met on the runway by United officials and a security team and whisked away to a seven- bedroom countryside hideaway.

The luxury property boasts a high-tech fitness complex complete with pool and jacuzzi — allowing Ronaldo to work on his fitness ahead of his Old Trafford homecoming next Saturday against Newcastle United.

A six-strong security team has accompanied him and is patrolling the property, which the club has rented after they pulled off his stunning £12.85million transfer.

Ronaldo, 36, will spend five days in quarantine before going to United’s Carrington training ground to meet his new team-mates on Wednesday.

Charles Igbinidu is a Public Relations practitioner in Lagos, Nigeria
@https://twitter.com/ionigeria
Previous Kaduna LG Polls: Stray Bullet Kills 9-Year-Old
Next Obasanjo says addiction to Squash is one of the secrets of his longevity