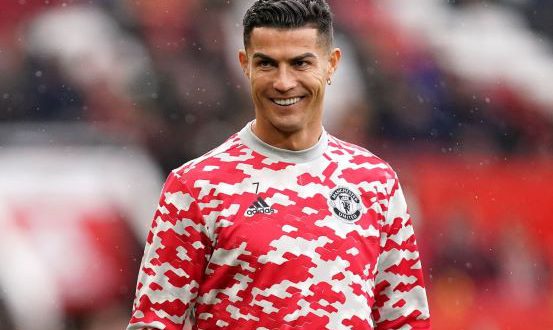 CRISTIANO RONALDO’S potential switch to Atletico Madrid looks to be all but over after the club’s supporters released a statement rejecting the transfer.

The 37-year-old has been linked with a switch to the Wanda Metropolitano after expressing his desire to depart Old Trafford for a Champions League side.

Reports earlier this month stated how boss Diego Simeone had made landing the wantaway Manchester United ace his No1 priority.

Simone’s son then hinted at the five-time Ballon d’Or winner joining the club by liking a tweet about the forward.

It has also been claimed that Ronaldo is willing to take a 30 per cent pay cut in order to join the Spanish outfit.

Though Atletico fans do not want the Portugal international to join them due to his affiliation with their rivals Real Madrid having started a campaign against the move.

And the club’s fan organisation Union Internacional de Penas del Atletico de Madrid have now released a statement where they declared they would not accept signing him.

A tweet read: “Given the possibility that the signing of Cristiano Ronaldo is more than just a rumour we express our absolute rejection of any hypothetical incorporation into our club.

“The aforementioned player represents the antithesis of the values that are the hallmarks of our Atleti, such as effort, generosity, simplicity and humility.

“Even in the unlikely event that a player in decline such as Cristiano Ronaldo could secure a title; we would not accept his signing.

“The sense of belonging to our Atletico is not something that is within his reach, to his misfortune, so he could never achieve our affection or recognition.

“Therefore, we ask the club to reject his possible signing, if he has ever been considered.”

Atletico president Enrqiue Cerezo recently ruled out a potential switch for Ronaldo due to their intense rivalry with Los Blancos.

He told COPE: “I don’t know who invented this story about Cristiano Ronaldo to Atletico Madrid.

“It’s definitely not true. It’s practically impossible for him to come to Atletico Madrid.”

After training alone during the summer, Ronaldo was back at Carrinton on Tuesday where he arrived alongside agent Jorge Mendes.

It has been said that Ronaldo will be allowed to depart on loan for the 2022-23 season, but only if he pens a new United contract first.