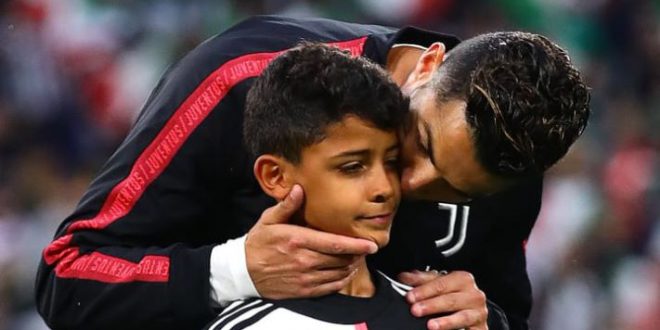 Cristiano Ronaldo wants his son to become the best in football

CRISTIANO RONALDO has enrolled his children into a Lisbon school amid links to Sporting Lisbon.

The Manchester United star’s future is uncertain with the Portuguese keen to leave in search of Champions League football.

Former club Sporting, where Ronaldo started his career, have been mooted as a potential destination for the superstar.

And according to Portuguese outlet Correio da Manha, Ronaldo has hinted at a return by registering his kids at a school in Lisbon.

Sporting coach Francisco Barao is confident CR7 will return but the striker would likely have to take a massive pay cut to complete the switch.

But the Portuguese outfit would be able to offer Champions League football and the emotion of a return could appeal to Ronaldo.

The United star is also believed to be open to joining Atletico Madrid with Diego Simeone keen to land Ronaldo.

Atletico need to sell in order to fund a move but have reportedly placed Antoine Griezmann on the transfer list to free up space in their wage budget.

Ronaldo could accept a wage reduction to push through a move since Atletico cannot afford his £360k-a-week salary.

But there is another obstacle which could prevent the transfer – Atletico fans.

Ronaldo’s connections to bitter rivals Real Madrid have seen Atletico fans start a campaign against the forward signing for them.

Supporters have started a “#ContraCR7” trend on Twitter, which translates to “#AgainstCR7”.

A number of supporters have posted pictures of Ronaldo with a big no symbol on his face to make their feelings clear.