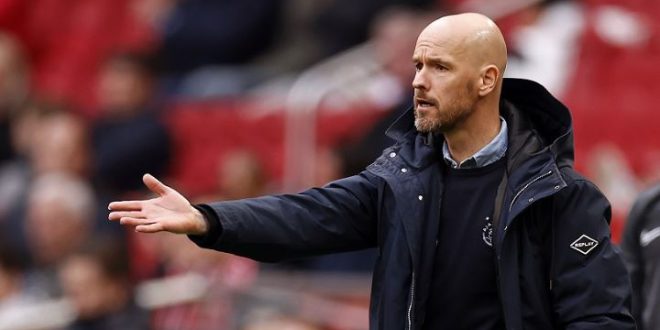 Cristiano Ronaldo has warned Manchester United that Erik ten Hag will “need time” to be successful at Old Trafford.

The 37-year-old has broken his silence on the Red Devils’ decision almost a month after Ten Hag was appointed on a three-year deal with the option of an extra season. “I know that he has done a fantastic job at Ajax, and that he is an experienced coach, but we have to give him time,” Ronaldo told manutd.com.

“Things must change the way he wants. If you do well, all of Manchester United will succeed, so I wish you all the best. We are all happy and excited [with the arrival], not only as players, but as fans as well. We have to believe that next year we can win titles.”

Mirror Football understands that Ten Hag is keen to work with the five-time Ballon d’Or winner, who only has one campaign left on his contract. The Ajax boss took charge of his final home match in Amsterdam this week and wrapped up the league title. On Thursday, Ten Hag invited United’s Football director, John Murtough, to a meeting in which transfer targets were discussed.

His right-hand man at Ajax, Mitchell van der Gaag, was also in attendance, as was Steve McClaren. The ex- England manager worked with Ten Hag at Twente more than a decade ago and the pair will reunite at Old Trafford. The 51-year-old, whose final match in the Eredivisie will be a trip to Vitesse on Sunday, explained his decision to join the Red Devils following Wednesday’s 5-0 thrashing of Heerenveen at the Johan Cruyff Arena.

“It felt like a difficult but great challenge. That is the most beautiful thing there is,” Ten Hag declared to Voetbal International when asked about the United job. “There is something to build at United and something to gain. Manchester United is such a big name in football history. It feels like a challenge to put the club back on track of winning.”

The Dutch tactician added: “Old Trafford is nicknamed the Theatre of Dreams for a reason. It is a club with name, fame and allure in international football. Everyone knows the history of the beautiful teams. From Sir Alex Ferguson of course, but also further back in time. The great team of the late fifties, which suddenly disappeared with the plane crash.

“The history is impressive, but I also started to delve into the present and the future. And the options that are available. They are there, also financially. If you also get a good feeling about the people there, then the picture is right and then the factors are present to take this step.”