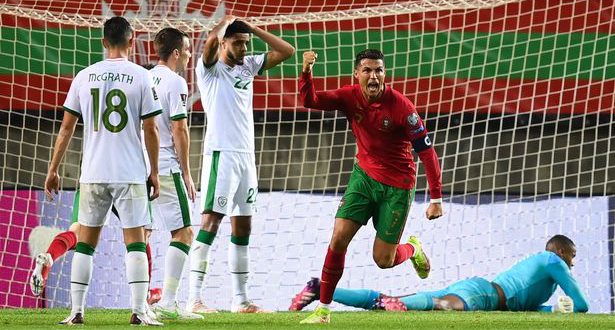 Cristiano Ronaldo has become the all-time top international goalscorer after netting a sensational brace against the Republic of Ireland.

Portugal scored twice in the last seven minutes against their European opponents at the Estádio Algarve in a World Cup qualifier.

Ronaldo grabbed them both, including the winner in the fifth minute of stoppage time.

He had scored with two minutes to draw the game level, his 110th goal on the international stage, and then grabbed his 111th shortly after.

The forward spurned an early opportunity from the spot as Gavin Bazunu guessed right to keep the game goalless.

However he made up for it later in the contest with an incredible late show and his goals takes him clear of Iran’s Ali Daei, who scored 109 times in 149 games.

Ronaldo equalled Daei’s total with a brace against France at Euro 2020 earlier this summer.

The 36-year-old’s first international goal came at Euro 2004 in his home country when he headed home against Greece.

“I’m so happy, not just because I beat the record, but for the special moment that we had,” Ronaldo said after the game. “I have to appreciate what the team did, we believed until the end. I’m so glad.

“I’m very happy, I have a few more years of my career and I still want to shine and play in the best football league in the world, the Premier League. I dedicate it to the whole team, to all Portuguese people and to the family.”

The forward has been equally as prolific with his country as he has with his various clubs sides.

On four occasions Ronaldo has scored double figure goals during a year with his total of 14 in 2019 a career high.

Five years ago the forward’s goals translated to glory as he helped Portugal win Euro 2016, scoring three times during the tournament.

He has also added the UEFA Nations League more recently.

The Manchester United new boy has scored 85 of his goals from open play with 14 coming from the spot and a further 10 as a result of direct free-kicks.

The Portugal star had missed an earlier penalty

A further breakdown shows that 59 of Ronaldo’s strikes have come from his right foot with a further 25 from his left leg and his head.

The striker’s favoured opponents during his international career have been Lithuania and Sweden, both of whom he has scored against seven times.

Joao Moutinho, currently of Wolves, and Ricardo Quaresma have been the two players to provide for Ronaldo the most during his international career – each player offering eight assists.

Daei has previously hailed Ronaldo and his achievements as he prepares to see his record broken.

“I’ve been always proud of [ Cristiano Ronaldo ]. He is one of the top three football players in the world and amongst those who will not be forgotten,” he told Euronews.

“Ronaldo has proved during years that with perseverance, hard work and professionalism one can achieve many goals.”

Charles Igbinidu is a Public Relations practitioner in Lagos, Nigeria
@https://twitter.com/ionigeria
Previous Police says a total of 73 students were abducted from Government Day Secondary School, Zamfara
Next US is finally waking up to Sleepy Joe Biden’s cosmic uselessness