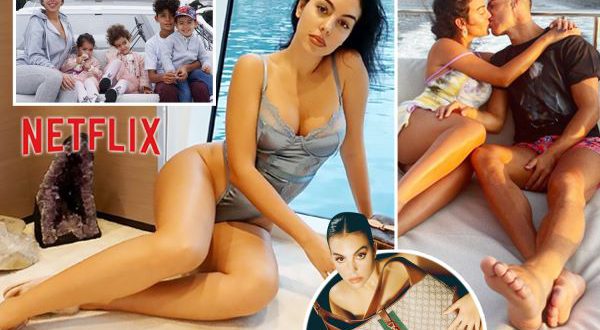 Cristiano Ronaldo will tell the world how he fell in love with former shop worker Georgina Rodriguez in a new Netflix documentary.

The 36-year-old will admit he fell for the pretty brunette in a ‘split-second moment’ and never thought he would end up feeling the way he did about her.

Confirming Manchester United forward Ronaldo would appear, he told local media: “Cristiano’s incorporation is total but complements a vision of who Georgina is and her relationship with the father of her children.

“It conditions all her life but the focus is on her and knowing her also through her own eyes.”

Dad-of-four Ronaldo, whose three-year-old daughter Alana Martina with Georgina is the youngest of his brood, lifts the lid on the moment he fell for Rodriguez in the documentary.

He will tell fans: “It was a split-second moment. I never thought it would be that big as to fall in love with her, I really didn’t expect it. Georgina is the woman I am totally in love with.”

Georgina, in a preview of the first series in the documentary, confesses: “I am 27 and five years ago my life has changed.

“The day I met Cristiano was a Thursday in the summer, as I was leaving the shop when a handsome man almost two metres tall….”

The model and influencer will introduce herself to Netflix viewers by claiming: “Many people know my name but few know who I am.”

Cristiano’s move back to Old Trafford is not expected to feature in the documentary and during filming, Georgina appeared to confirm he would not leave Juventus.

Rodriguez, who is said to have had to leave her job at Gucci in 2016 due to the paparazzi, returned to Jaca, the Spanish Pyrenees city where she lived from the age of three till around 17, for filming.

Cristiano and his family have now reunited at a rented mansion in Alderley Edge, Cheshire, following his record-breaking performance for Portugal against Ireland earlier this week.

He became the top international goalscorer in men’s football history, reaching the milestone of 111 goals in dramatic fashion by giving his nation a late win.

Cristiano, who scored 118 goals in 292 games during his first spell at United, will don the famous No7 jersey next Saturday when the Red Devils face Newcastle.

The football idol flew into the UK by private jet on Thursday and headed immediately to a seven-bedroom countryside hideaway where he is self-isolating under coronavirus rules before his second United debut.

He arrived in Manchester 24 hours before his partner posted a series of photos on Instagram of her and their four children travelling by private jet.

The pictures carried a heart emoji above the Manchester location tag, and she also posted a photo of a ‘welcome’ Cadbury’s chocolate bar.

It is not yet clear if she will return to Spain for the Netflix premiere of her documentary.