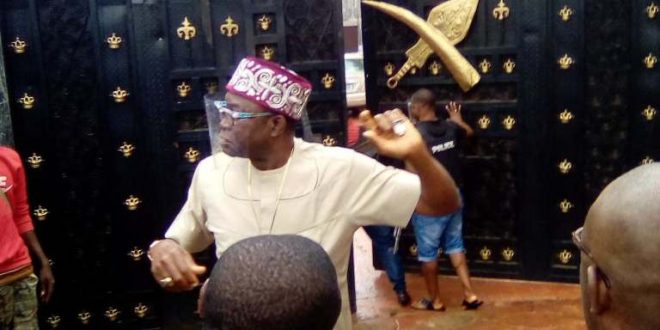 Crisis erupts in Ogidi over death of youth leader

Policemen were said to have stormed Okoye’s Umueze Alor village, to arrest him and others, over a land issue between the community and the Traditional Ruler, Igwe Pharmacist Alex Onyido.

The incident which coincided with this year’s annual Nwafor Ogidi Cultural Festival, a popular festival of the Ogidi community; occurred Thursday evening, at the commencement of the when the week-long festivities.

On hearing the news of the death of the youth leader, the entire community erupted, and the youths took to the streets, more so when it was reported he died in a bid to escape police arrest and that scores have already been arrested by the police.

They were enraged and ran amok; made straight to the house of the deceased to pick his corpse but were disappointedly informed that the corpse had been deposited at the Iyi-Enu Mission hospital morgue, Ogidi.

In anger, they made a bonfire with used tyres, barricaded the ever-busy Onitsha-Enugu old road and made straight to the morgue brought the corpse and headed to the palace of the monarch where they deposited it and dispersed.

Addressing newsmen on the incident, the Chairman of the village who led the protesters, Mr Obidi Benedict, flanked by his vice, Nonso Agbata, alleged that “the cause of this death was the community Ogbor land which the monarch built culverts upon and started encroachment without our consent.

“So on asking why such should be done, he started arresting those who are out to oppose him, including myself, the deceased, my vice and others.

“We have dumped the corpse in his palace and demanded that he should release those he arrested, stop encroaching on our land and arresting us before the corpse will be removed.

“It was the police that the monarch sent that held him as he was about to evade the arrest in his house and was pushed down from the storey building and he died”, he further alleged.

Addressing the angry youths, before leaving the palace after dumping the corpse of their leader, a representative of the monarch, High Chief, Ugochukwu Okwosa Owelle, urged them to soft-pedal, assuring that the matter would be resolved amicably.

“You should see it that death has happened and what we need now is a solution for a peaceful settlement as brothers. What you people are doing now is worsening the situation, I plead that we discuss as brothers for the good of us all”, Owelle pleaded.

But his plea fell on deaf ears as the youths left him with the corpse minutes later.

Shortly after, the President General of the Community, High Chief Chuka Onubogu, came to the palace and removed the corpse and returned it back to the morgue.

He described the incident as unfortunate and urged the bereaved to take heart as it was not an intentional act.

“It is unfortunate and we have to take heart as it was not intentional and nobody arrested the deceased nor beat him up from what I was told. He fell down as he was escaping as I was told but an autopsy will tell the cause of his death”, Onubogu said.

On the part of those still under detention, he said, “they will soon be released. I have talked with the CP and he assured me that they will be released immediately”.

Victim not pushed down from a storey building ― Police

Reacting to the incident, the Anambra State police command debunked the story making rounds that middle the youth leader Mr Chike Okoye, died following a fall from a storey building.

The police dismissed that theory, saying that he was not pushed by anybody as being speculated.

The Police Public Relations Officer, PPRO, in the state, Mr Haruna Mohammed said that the man tried to resist arrest from the police and jumped from the top floor of the one storey building and became unconscious.

According to him, the man was immediately rushed to the hospital where he later died.

“The police was investigating a case and it came to a point of effecting an arrest. When he saw the policemen, he took to his heels and jumped from upstairs and landed on the ground floor. He became unconscious and was taken to the hospital where he received treatment, but later died”, the PPRO said.