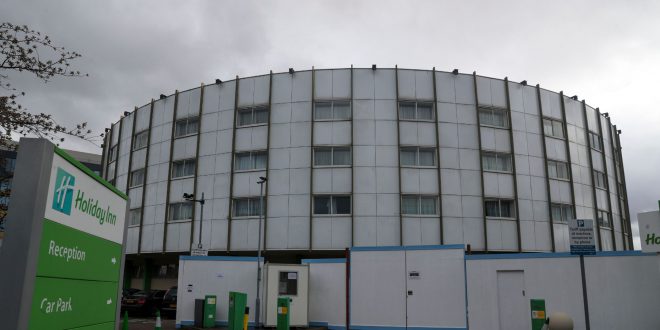 A Holiday Inn hotel near Heathrow Airport in London

An announcement by the UK government on mandatory hotel quarantine will be made later today, a government minister has reportedly told Sky News.

“There will be an announcement on this issue later on today,” vaccines minister Nadhim Zahawi said.

Asked if people should hold off on booking a summer holiday, Mr Zahawi replied: “Absolutely.”

He added: “I think it’s far too early.

“There’s still 37,000 people in hospital with COVID at the moment, it’s far too early for us to even speculate about the summer.”

Travel industry sources have told Sky News they expect the policy to be introduced imminently, as the government tries to suppress new variants of coronavirus.

They anticipate an announcement could come as soon as today, but even those close to discussions remain unclear how broad the restrictions will be.

Sources believe differing views remain among ministers over whether restrictions should apply to arrivals from all countries to the UK, or simply those from a prescribed list.

While hotel groups are ready to help house thousands of arrivals, the move will be another hammer blow to the travel industry, signalling that unfettered overseas travel is unlikely to return this summer.

Senior government ministers are due to meet on Tuesday to consider further travel restrictions, including requiring travellers arriving in the UK to pay to quarantine at a designated hotel.

Prime Minister Boris Johnson has expressed his concern that – as the UK’s vaccination programme is rolled out – there is a risk a new COVID variant could develop abroad that is resistant to existing vaccines.

Asked at a Downing Street news conference if he supported enforced hotel quarantine for all those arriving in the UK, Health Secretary Matt Hancock replied: “I think it is incredibly important that we are cautious at the border.”

Mr Hancock, who sits on the cabinet’s COVID-O committee that will meet on Tuesday, highlighted how the government last week closed all UK travel corridors – which had allowed arrivals from some countries to avoid having to quarantine – until at least 15 February.

And he stressed that it is currently “illegal”, under England’s current national lockdown, to travel abroad without a reasonable excuse as set out in legislation.

He added: “It is important that we protect from new variants should they have vaccine evasion.

“And it is also reasonable to take a precautionary principle to protect this country whilst we work on the science and the analysis of the different variants that are discovered around the world.”

Earlier on Monday, Mr Johnson confirmed that asking those arriving in the UK to quarantine in hotels “is certainly one thing we’re actively now working on”.

“We need a solution that gives us the maximum possible protection against reinfection from abroad,” he said.

Australia and New Zealand are among countries that already require arriving travellers to quarantine in approved accommodation.

Heathrow Airport has warned that requiring all international arrivals to the UK to enter quarantine would have “huge ramifications” for the aviation sector.

“We support measures that will bring the COVID-19 crisis to an end once and for all,” a spokesman said.

“However, we must be clear that a blanket hotel quarantine is effectively the closure of our borders which carries huge ramifications for Britain and its aviation sector, already on its knees.”

The airport urged Chancellor Rishi Sunak to “finally deliver on his promise of a comprehensive financial support package for UK aviation”.

Other industry bodies warned of a “catastrophic” impact of further UK border measures.