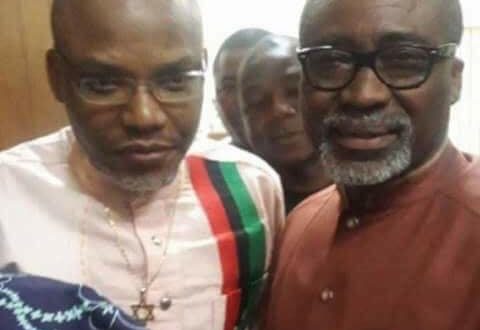 Justice Binta Nyako of the Federal High Court in Abuja has ordered Senator Eyninnaya Abaribe, and two others standing as sureties for the leader of the proscribed Indigenous People of Biafra IPOB, Nnamdi Kanu, to produce him in court or risk jail term or forfeit their N300m bail bond.

Justice Nyako gave the order today at the resumed hearing of the treasonable felony case filed against Kanu and three members of IPOB.

Kanu was absent in court while the other accused persons; Chidiebere Onwudiwe, Benjamin Madubugwu and David Nwawuisi; were in court for the trial. Recall that in August this year, Abaribe and two others, Immanuel Shalum Okabenmabu and Tochukwu Uchendu, stood as sureties when Kanu was granted bail.

Justice Nyako told Abaribe’s lawyer, Ogechi Ogunna, that a motion filed by his client to be withdrawn as a surety for Kanu cannot be heard until he produces Kanu in court. The judge gave the senator three options. She asked Abaribe to produce Kanu in court and then apply to be discharged as a surety. She also gave Abaribe the option to forfeit his N100m bail bond. The third option ‎was for Abaribe to request to be given time to produce the defendant in court.

The case has been adjourned to November 20th.