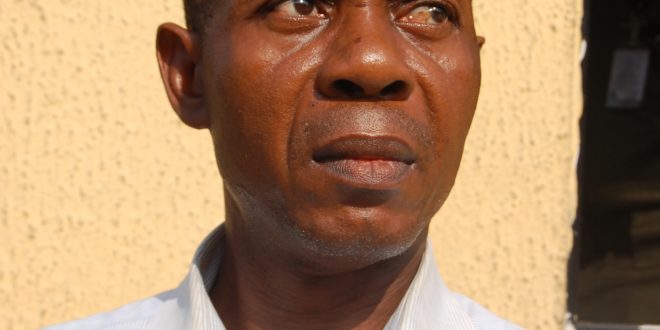 Justice U.N Agomoh of the Federal High Court, Port Harcourt, Rivers State has convicted and sentenced one Valentine  Madu to seven years imprisonment. The sentence is without an option of fine.

The convict was arraigned on 27 September, 2012 on one-count amended charge bordering on obtaining money by false pretence brought against him by the Economic and Financial Crimes Commission, EFCC. Specifically, Madu collected a sum of N400,000( Four hundred Naira only) from one Mr. Chioma Princewill as the cost of instituting a legal action against Total E & F Nigeria Limited for the damage of farmlands and crops belonging to Omuorukwerie family in Erema in Ogba/Egbema, Ndoni Local Government area of Rivers State. He collected the money but did not render the service for which the money was paid.

He pleaded not guilty to the one-count charge and the matter went into full trial. Justice Agumoh found Madu guilty and consequently convicted and sentenced him to seven years imprisonment without an option of fine. The Judge also ordered the restitution of N300, 000.00 (Three hundred thousand) to the victim.

The charge reads, “that you Hon. Valentine A. Madu on or about the 20th day of March 2001 at Port Harcourt in the Port Harcourt Judicial Division did with intent to defraud, obtain the sum of Four Hundred Thousand only (N400, 000.00) from MR. CHIOMA PRINCEWILL under the false pretence that the money would be used for the purpose of instituting legal action against TOTAL E & FF NIG. LTD for the damage of farmlands and crops belonging to Omuorukwerie family in Erema in Ogba Egbema Ndoni Local Government Area of Rivers State which representation you knew to be false and thereby committed an offence contrary to section 1 (1) (b) of the Advanced Fee Fraud and other Fraud Related Offences Act No.13 of 1995 and punishable under Section 1(3) of the same Act”.