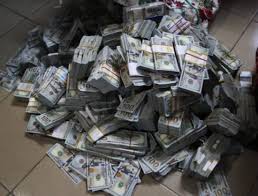 The funds had been stashed in iron cabinets and “Ghana-must-go” bags in the apartment before they were discovered and recovered on April 11, 2017 by the Economic and Financial Crimes Commission following intelligence information.

The anti-graft agency had earlier on April 13, 2017 obtained an interim court order temporarily forfeiting the funds to the Federal Government.

Justice Muslim Hassan, who granted the interim order, had given 14 days for anyone interested in the funds to appear before him to show cause why the money should not be permanently forfeited to the Federal Government.

But on May 5, 2017 when the matter came up, no one came before the judge to claim the money.

However, a private legal practitioner, Mr. Olukoya Ogungbeje, appeared before the judge, with an application, urging the judge to suspend the final forfeiture proceedings pending when a three-man panel constituted by President Muhammadu Buhari in relation to the funds would submit its report.

The panel, headed by the Vice-President, Prof. Yemi Osinbajo, was to probe the claim and counter-claim of the Nigeria Intelligence Agency and Rivers State Government to the funds.

But the EFCC had opposed Ogungbeje’s application and urged Justice Hassan to dismiss it and go ahead with the forfeiture proceedings.

The judge described the application as totally strange, noting that having not appealed against the interim forfeiture order, Ogungbeje had no right to seek a stay of proceedings in the case.

The judge, who noted that Ogungbeje was not a party in the suit filed by the EFCC, described the lawyer as a meddlesome interloper and a busybody, adding that his application was strange to law.

He advised the lawyer to explore the Freedom of Information Act if he wanted information from the Federal Government on the findings of the Osinbajo’s panel.

Having dismissed Ogungbeje’s application, the judge subsequently made an order permanently forfeiting the funds to the Federal Government, noting that no one had appeared to show cause why the permanent forfeiture order should not be made.

Justice Hassan held, “I am in complete agreement with the submission of the learned counsel for the applicant (EFCC) that the property sought to be attached are reasonably suspected to be proceeds of unlawful activities and that by every standard this huge sum of money is not expected to be kept without going through a designated financial institution; more so, nobody has shown cause why the said sum should not be forfeited to the Federal Government of Nigeria. Having regard to the foregoing, I have no other option but to grant this application as prayed.

“For the avoidance of any doubt, I hereby make the following orders: 1. A final order is made forfeiting the sums of   $43,449,947 found by the Economic and Financial Crimes Commission at Flat 7B of No. 16 Osborne Road, Osborne Towers, Ikoyi, Lagos, which sum is reasonably suspected to be proceeds of unlawful activities to the Federal Government of Nigeria.”

After the judgment, the EFCC lawyer, Idris Mohammed, urged Justice Hassan to award a cost of N5m against Ogungbeje for wasting the judicial time of the court with his application.