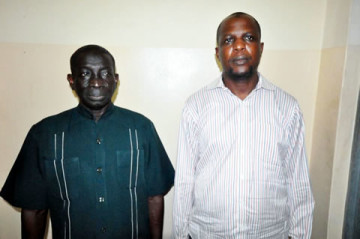 The Economic and Financial Crimes Commission, EFCC, on Monday November 13, 2017, secured the conviction of two former officials of the Office of the Accountant General of the Federation, OAGF,  Mohammed Dogonyaro Audu (also known as Abdullahi Dogonyaro Mohammed) and Yahaya Ayodeji.

Justice Yusuf Halilu of the Federal Capital Territory HighCourt, sitting in Jabi, Abuja found them guilty of a 10-count charge bordering on criminal conspiracy and complicity in award of contract to the tune ofN1billion (One billion naira).

Trouble started for the duo after they allegedly abused their offices by floating companies through which they cornered contracts emanating from the Economic Reforms and Governance Project, ERGP, and Government Integrated Financial Management Information System, GIFMIS, domiciled in the Office of the Accountant General of the Federation.

Audu and Ayodeji had pleaded “not guilty” to the charges when they were arraigned on May 26, 2015, thereby setting the stage for their trial.In the course of the trial, counsel to the EFCC, Cosmas Ugwu, presented three witnesses and tendered relevant documents which were all admitted in evidence .

Delivering his judgment, Justice Halilu said the prosecution had proved its case beyond reasonable doubt adding that, as public servants, the convicts abused their offices.“I am not expected to remove or add anything before me. They(Audu and Ayodeji) took advantage of their offices and did what they did.

Previous We’ll Die With You If You Come, IPOB Warns Buhari Ahead Of His Visit To The South East
Next PDP Outshines Mates At Anambra Guber Debate