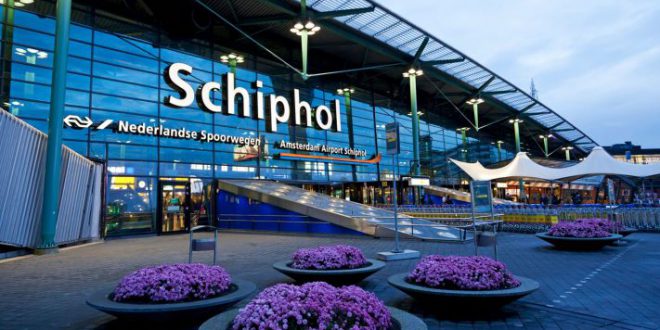 The couple were arrested at Schiphol airport. File pic

Couple with COVID-19 arrested on plane after fleeing quarantine hotel

A married couple who tested positive for COVID-19 have been arrested after fleeing a quarantine hotel in the Netherlands before attempting to leave the country.

The pair were arrested on an aeroplane that was about to take off at Amsterdam’s Schiphol airport on Sunday evening, according to Dutch police.

Officers did not release the names and nationalities of those detained, but the city’s Het Parool newspaper reported that they were a Spanish man and Portuguese woman who were trying to fly to Spain.

The couple had been staying at a quarantine hotel in the Kennmerland region, where travellers from South Africa who have tested positive for COVID-19 are self-isolating.

Among more than 600 passengers on two flights from Cape Town and Johannesburg, 61 have tested positive for COVID-19 – and 13 of them were infected with the Omicron variant.

It is unclear whether the couple were among those travellers.

They were turned over to health authorities and could be prosecuted for breaching Dutch quarantine rules, De Telegraaf reported.

Their arrest was made “without violence”, the newspaper added.

Private security guards at the hotel make sure guests remain in isolation, while police outside ensure no one enters the premises if they do not need to be there.