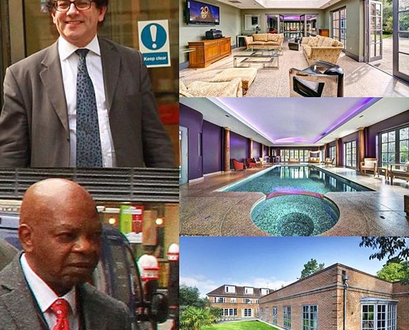 Prince Arthur Eze, 62, is facing a £1 million compensation bill after pulling out of a deal to buy a British couple’s seven-bedroom home.
The Nigerian oil baron agreed to pay £5 million for Richard and Deborah Conway’s mansion in Mill Hill, exchanging contracts on the home in August 2015.

He then pulled out of the deal, forcing the Conways to take out an expensive bridging loan to complete their move to a new home in Cambridgeshire.

They eventually found a new buyer for the home, selling it for £4.2 million, but sued Prince Eze. On Friday in the High Court Judge Andrew Keyser ruled the couple were due £800,000 in compensation as well as a six-figure sum in costs which will see the total rise to at least £1 million.

“Prince Eze had signed,” said the judge. “The only contractual term that remained outstanding was the completion date.” Mr Conway, 62, told the court he and his wife were approaching retirement and had wanted to “pay off all our debts and start again” when they struck the deal — through a “go-between” — with Prince Eze.

Eze claimed the contract was “void” because the middleman, who he did not know before being approached, had taken a “secret commission”.

He told the court he had not viewed the house before making an offer and putting down a £500,000 deposit, but claimed he “thought something funny was going on” and pulled out.

He added that there had been a “drastic fall in oil prices”, and that he had had “good intentions” to buy the house. The judge said the middleman had acted on Prince Eze’s authority, and that the deposit would count towards the damages payment.

Previous “I Am Not A Racist”: Donald Trump Says
Next Mike Ozekhome Disgraced At 14th Gani Fawehinmi Annual Symposium