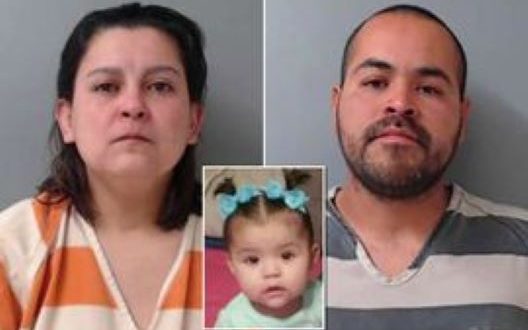 Couple jailed for dissolving body of dead daughter, 2, in bucket of acid

A couple have been jailed after callously disposing of their two-year-old daughter’s body in a bucket of acid.

Monica Dominguez and Gerardo Zavala Loredo, 32, from Texas, were arrested after the horrific discovery of the remains of Rebecka Zavala in February.

Mystery surrounds how the tot died but Dominguez said to police she had drowned while being left unsupervised in a bath, 7news reports.

She told police Loredo helped her dispose of the baby’s body.

Records show Dominguez had previously been arrested 17 times with 28 different charges – including five involving injury to a child.

The last arrest happened in February last year and she spent nine days in jail.

Authorities were unable to charge either parents with murder because the state of Rebecka’s remains made it impossible to determine how she died.

Instead, Domingues admitted tampering with evidence, endangering a child, and abuse of a corpse.

She was jailed for 20 years with a 10-year sentence for her previous conviction of child negligence.

Loredo was convicted of tampering with a human corpse and sentenced to 14 years.

Jorge Dominguez said his auntie would lose her temper with her children, but he never thought she would get to ”that point”.

The death of Rebecka has promoted calls for new laws to strengthen the protection for children from abusive parents in Texas.

Michele Nigliazzo, a family attorney, wants to create a petition that seeks to ask state legislators to take action in order to prevent what happened to little Rebecka from ever happening again.

She said: “Currently in Texas, there is no system in place to protect children who are given to someone by the court and then replaced by that person to a potential dangerous parent.”

Nigliazzo added the new law should be named after Rebecka so that her memory is not forgotten.

Charles Igbinidu is a Public Relations practitioner in Lagos, Nigeria
@https://twitter.com/ionigeria
Previous HATE SPEECH: Student who said Muslims should be ‘wiped off face of earth’ facing jail
Next INCREDIBLE: Jealous mother kills 3 young sons because of the attention her husband gave them