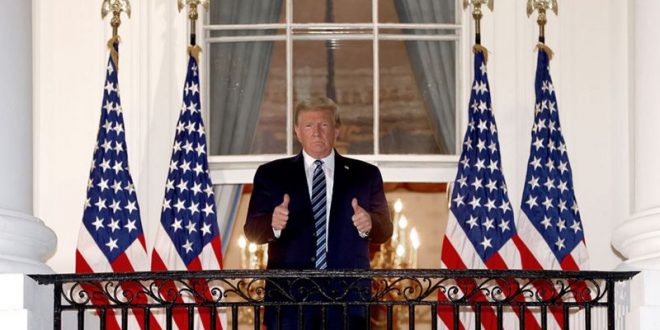 Coronavirus: Trump ‘no longer a transmission risk to others’ – Doctor

US President Donald Trump is no longer a Covid-19 transmission risk to others, the White House physician has said.

Sean Conley’s memo is the first update on Mr Trump’s health since Thursday.

Earlier on Saturday the president delivered a speech in front of cheering supporters at the White House in his first public appearance since being hospitalised with the virus.

There had been concerns that he might still be contagious following his three-day hospital stay.

The doctor’s memo said the latest tests on the president revealed there was “no longer evidence of actively replicating virus”, and that his viral load was “decreasing”.

However, the statement did not say whether Mr Trump had tested negative for Covid-19.

Trump no longer needs to isolate, his doctor says pic.twitter.com/lQQ6KRANle

In the memo, Dr Conley said President Trump had been given sensitive lab tests that detect how much of the virus is still in his system.

“This evening I am happy to report that in addition to the President meeting [Centers for Disease Control and Prevention] criteria for the safe discontinuation of isolation, this morning’s Covid PCR sample demonstrates, by currently recognised standards, he is no longer considered a transmission risk to others,” he said.

Mr Trump first started showing symptoms of coronavirus 10 days ago, and was admitted to Walter Reed Medical Center a day later, on 2 October.

While there he was treated with – among other medication – dexamethasone, a steroid medication usually only used on people who are seriously or critically ill with the virus.

Dr Conley’s latest update comes after President Trump told a crowd at a White House event that he was “feeling great”. He has also said that he is no longer taking any medication against Covid-19.

The event on Saturday was officially a “peaceful protest”, but looked, critics said, much like a Trump campaign rally.

His rival in next month’s presidential election, Joe Biden, has been campaigning in Pennsylvania. He said his “heart goes out” to all those families who have lost someone they love to coronavirus.

Polling suggests Mr Biden has a single-digit lead over Mr Trump and an ABC News/Ipsos poll found that just 35% of Americans approved of how Mr Trump has handled the coronavirus crisis.

Charles Igbinidu is a Public Relations practitioner in Lagos, Nigeria
@https://twitter.com/ionigeria
Previous Ondo 2020: Akeredolu leading with results announced in 12 LGAs
Next Rich Americans Are Protecting Their Fortunes From a Possible Biden Win