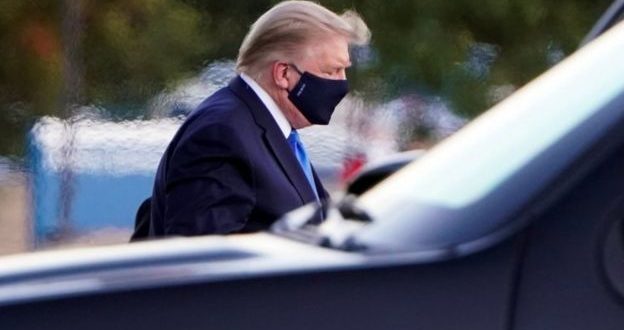 Coronavirus: Trump is taking two experimental drugs – what are they?

Donald Trump has been given two experimental drugs after testing positive for COVID-19.

White House doctor Sean Conley said the president was given a dose of an antibody drug being developed by Regeneron on Friday before he was taken to a military hospital where he has started remdesivir therapy.

The president appeared upbeat as he landed at the Walter Reed Military Hospital in Maryland on Friday evening despite developing fatigue symptoms and having trouble breathing, according to an adviser.

What does remdesivir and Regeneron’s drug do, how effective they have been in trials?

A drug that once offered hope in the treatment of Ebola, remdesivir is an antiviral medicine that has not been approved anywhere in the world for any use.

It is injected into the vein in the hope it will prevent SARS CoV-2 (the virus that causes COVID-19) from multiplying in the body, with some patients recovering faster after using it.

Gilead Sciences Inc began research on remdesivir in 2009 as part of studies into hepatitis C and respiratory syncytial virus (RSV), a common and highly contagious respiratory virus that most children get before they turn two.

After scientists in China determined the new pneumonia-like illness was caused by a coronavirus, Gilead provided remdesivir to China to test the drug against the virus.

Remdesivir is thought to interfere with the mechanism that certain viruses use to make copies of themselves, but scientists are still determining how that occurs.

Several clinical trials and laboratory studies have taken place since January, with some promising signs.

However, a report published in The Lancet medical journal on 3 October looking at several studies has found remdesivir “did not appear to affect rates of SARS CoV-2 viral load decline and mortality”.

It said using remdesivir early “substantially decreased” viral loads but this effect was “completely lost” when the drug was given just eight hours after infection.

The report concluded that remdesivir “might require initiation before the peak viral replication” but that is “not feasible” in humans as they display symptoms after the virus multiplies.

It added that there is no clinical reason why remdesivir could not be administered before someone shows symptoms.

What is the experimental Regeneron treatment?

Drug maker Regeneron provided a dose of its experimental antibody treatment to the president on Friday before the decision to take him to Walter Reed was made.

Still in large-scale clinical trials, the new antiviral antibody “cocktail” works by binding to a protein on the surface of the virus.

This is meant to stop the virus from attaching to cells and replicating, while allowing the immune system to attack the virus.

Mr Trump was given a single 8g dose, which should “last for quite a long time”, Regeneron chief executive Dr Leonard Schleifer told CNN.

Last weekend, the drug started being used in “about three hospitals in the north” of England as part of Oxford University’s national recovery trial, Professor Peter Horby told the BBC.

The specialist in emerging infectious diseases at the University of Oxford said the drug is “very promising” and “very potent”.

This class of drugs is “pretty safe and well understood” so is something he has “confidence in”, he said.

He added that about four or five hundred patients have been given it so far and there have been “no worrying safety signals”, with the plan to roll it out to another 30 to 40 UK hospitals next week.

Prof Horby said a single dose of the treatment provides “prolonged protection” for “a month to six weeks”.

Dr Jeremy Faust, an emergency doctor at Brigham and Women’s Hospital in Boston, said he would not give it to his patients because he could not say what the benefit is, or the risks.

Charles Igbinidu is a Public Relations practitioner in Lagos, Nigeria
@https://twitter.com/ionigeria
Previous Amazon says nearly 20,000 employees have caught the coronavirus
Next Release of New Bond movie ‘No Time To Die’ delayed again – this time until April.