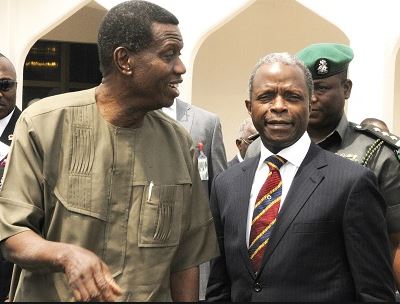 Acting President, Yemi Osinbajo has just revealed that he consulted the General Overseer of the Redeemed Christians Church of God, RCCG, Pastor Enoch Adeboye and his wife, Dolapo before accepting to serve as the country’s Vice President in 2015.

Osinbajo who spoke at the public presentation of a book: Pastor E.A Adeboye: His Life and Calling said that because he was not a politician when the opportunity came, only two persons were in his mind to get their consent. “And those two were my wife and Daddy G.O. Over the years, Daddy had been instrumental factor to my spiritual growth. Just like Baba Obasanjo, I consulted Daddy and gave the go-ahead to accept the VP position, before then, I was not a politician,” he said.

The acting president noted that RCCG was the only Church that has been able to pull the largest gathering at a convention in the world, saying; “Apart from Coca-cola, the Church is next in mileage across the world. And it all has to do with sincerity, dedication and humility of Daddy G.O.”