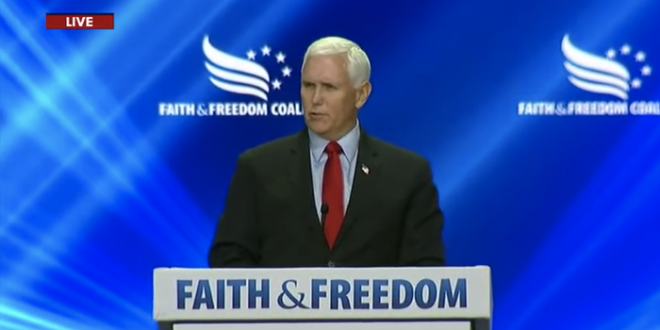 Mike Pence, the former US vice-president, has been heckled as a “traitor” for his refusal to overturn last year’s election result during a speech to a gathering of religious conservatives.

Pence, who is widely seen as laying the groundwork for a White House run in 2024, had entered an auditorium in Orlando, Florida to a standing ovation on Friday. But a small group began shouted abuse including “traitor!” as he began a 28-minute speech. The dissenters were quickly escorted out by police.

Earlier, in a corridor outside the ballroom, an attendee named Rick Hurley, wearing a red “Make America great again” cap, also vented his frustration over Pence’s role in certifying Donald Trump’s defeat on 6 January amid false claims of voter fraud.

“We need to start fighting!” Hurley shouted at anyone who would listen. “We need to stop being so damned nice. What the hell’s going on? Why is Pence coming today? Donald Trump has his pen in his back still.”

Before being taken aside by police, he also remarked: “I’m ready to fight. I’m going to boo him off stage. I’ll take the bullet. I’ll walk to the front of the stage and look him in the eye and and say, ‘What are you doing here?’

In an interview, Hurley said he had been at the US Capitol on 6 January. “I want to know why Pence is here today.” he said. “He stabbed Donald Trump in the back and took the coins like Judas.”

But Ralph Reed, organiser of the Faith & Freedom Coalition’s annual Road to Majority conference, was at pains to give Pence a warm welcome and honor him as stalwart of the Christian conservative movement.

And the ex-vice president, who earlier this month admitted that he and his former boss may never “see eye to eye” on the events of 6 January, when some Trump supporters called for him to be hanged, did not dwell on that disagreement during his remarks.

He instead told the gathering: “Thank you for the privilege of serving as your vice-president with Donald Trump. It was the greatest honor of my life.”

Pence made only a passing reference to the deadly insurrection that implied an equivalence with racial justice protests and Joe Biden’s policies: “We’ve all been through a lot over the past year: a global pandemic, civil unrest, a divisive election, a tragic day in our nation’s Capitol, and a new administration intent on transforming our country.”

Since leaving office, Pence has bought a house in Indiana, announced plans for a podcast and signed a two-book deal for his memoir. Despite the anger of some Trump supporters, he is seen as a potential candidate for the Republican nomination for president in 2024.

His conference speech on Friday duly listed the Trump administration’s achievements – from supreme court appointments to coronavirus vaccines – and took aim at Biden for rapidly unravelling its legacy with “a tidal wave of leftwing policies”.

Pence quipped: “Democrats have been so busy advancing their liberal agenda, sometimes I feel like the left hand doesn’t know what the far left hand is doing.”

He went on to rail against “an explosion” of runaway spending, proposed tax increases, plans to cut military funding and the cancellation of construction on Trump’s signature border wall.

“Literally in five months, they turned the most secure border in the world into the worst border crisis in American history,” Pence said to applause. “You know, when I was vice-president, I visited our southern border. And yes, it’s past time for our current vice-president to go to the border, put our policies back into effect and end the Biden border crisis today.”

He also threw out false assertions to go after “culture war” targets currently in vogue in conservative media including “cancel culture” and “defund the police”.

Among them was critical race theory which, developed by academics starting in the 1970s, examines how racism embedded in law and institutions creates an uneven playing field for people of color in America. Numerous Republican controlled states have moved to ban it from being taught in schools.

Pence crudely misrepresented the intellectual tool by stating: “Instead of teaching all of our children to be proud of their country, critical race theory teaches children as young as kindergarten to be ashamed of their skin color. Critical race theory is racism, pure and simple – and it should be rejected by every American of every race.”

“The truth is it’s past time for America to discard the left wing reflex to see systemic racism across our nation. As my friend Senator Tim Scott says so well, America is not a racist country – America is the most just, noble and inclusive nation ever to exist on the face of the earth.”

In another wildly contentious claim, Pence said: “The United States military is the greatest force for good the world has ever known.”

Pence closed a morning session that included Republican senators Ted Cruz, Marco Rubio and Rick Scott, all potential rivals for the 2024 nomination. Trump himself has not yet declared whether he will run or whether Pence would again be his running mate.