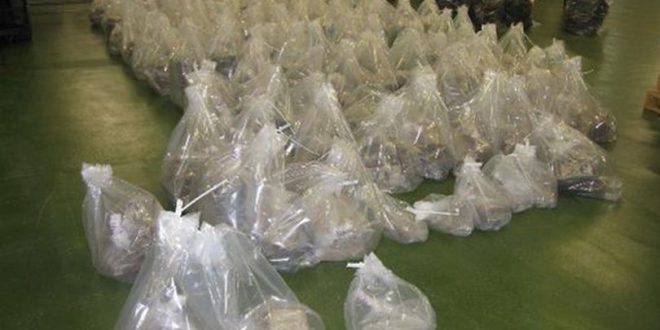 More than a tonne of cocaine worth about £100million was found hidden in a shipment of banana pulp from Colombia, the British Home Office reveals.

According to Mirror “Border Force officers discovered the concealed drugs, which were destined for the streets of Europe, during a routine inspection at the London Gateway depot in Thurrock, Essex last month”.

A total of 1,060 kilograms of cocaine were found hidden in a shipping container docked at the port on the Thames Estuary.

It is thought that the drugs were put in the cargo in Colombia – the world’s leading supplier of cocaine – and were due to arrive in Antwerp, Belgium.

The discovery on November 12 marks the second-largest shipment of cocaine to be discovered at the Essex port in the space of two months.

“Class A drugs such as cocaine inflict unimaginable damage on to our citizens and communities, shattering lives and stoking obscene levels of violence, disorder and crime.

“This significant seizure of drugs sends a stark message to criminals in the UK and abroad seeking to smuggle drugs into or through the UK: you will not succeed and we will use every inch of our law enforcement powers to track down and stop drugs from coming into the UK.”