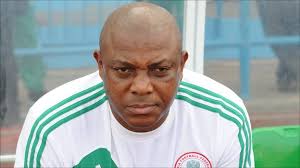 According to an ionigeria.com source close to the family, Keshi was rushed to the hospital this morning but was later confirmed  dead a few hours later.

It would be recalled that his wife, Kate died about six months ago in the United States of America after a protacted illness

Born  January  23, 1962 , he was one of only two people, along with Egypt‘s Mahmoud El-Gohary, to have won the Africa Cup of Nations as both a player and a coach.