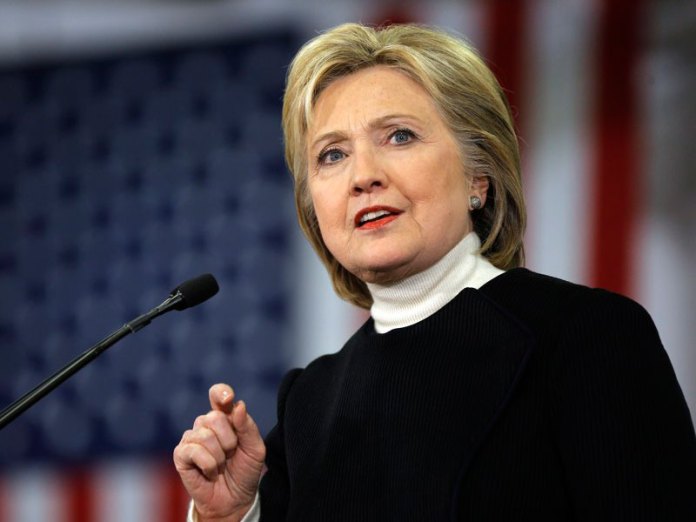 As polls by different organisations in the United States of America (USA) favours Hillary Clinton to emerge as the next President of the country, there are indications that a major plank of the strategy of the Republican Party is to paint her as corrupt.

The latest effort in that direction is an exclusive story by Fox news, a news medium sympathetic to the Republican Party.

According to Fox News, “shortly after Hillary Clinton left the Obama administration, the State Department quietly took steps to purchase real estate in Nigeria from a firm whose parent company is owned by a major donor to the Clinton Foundation.

According to the story, On March 20, 2013, William P. Franklin, an “international realty specialist” at the State Department, emailed Mary E. Davis, an American diplomat stationed in Africa, instructing her to “put on Post letterhead” an “expression of interest” by the department in purchasing property at Eko Atlantic, a massive real estate development off the coast of Lagos. Franklin further instructed that the signed letter was to be “delivered to Ronald Chagoury.”

The draft letter, also obtained by Fox News, was undated and addressed to Chagoury care of his firm South Energyx Nigeria Limited, a subsidiary of the larger Chagoury Group that is spearheading the Eko Atlantic real estate venture. The State Department letter sought, among other things, to confirm that the department could proceed with “acquisition of the real property…[at] the asking price of $1,250 per square meter.”

Overtures to real estate developers from State Department officials scouting locations for embassies, consulates and other diplomatic facilities would ordinarily not arouse interest. But in this case, the budding transaction – never completed, the department now says – raised eyebrows because Ronald Chagoury is the brother and business partner, in the Chagoury Group, of Gilbert Chagoury, a Lebanese-born businessman whom federal records show has donated between $1 and $5 million to the Clinton Foundation.

Indeed, Gilbert Chagoury’s friendship with the Clintons can be traced back to the Clinton presidency. In the mid-1990s, Chagoury donated nearly $500,000 to a voter-registration drive designed to help Democratic candidates, attended a White House dinner for premium donors, and met with high-ranking officials in the Clinton White House – including Susan Rice, now President Obama’s national security adviser – who were shaping U.S. policy toward Nigeria.

More recently, the Chagourys’ close ties to the Clintons generated headlines when a separate series of emails from 2009 – between Doug Band, an aide to former President Clinton and Huma Abedin, an aide to Secretary Clinton – revealed the eagerness of the State Department to oblige a request for Chagoury to be granted access to senior officials working on Lebanon.

The State Department’s outreach to the Chagoury family, looking to buy property from the brothers, came less than a month after former President Clinton himself toured the Eko Atlantic project – for the second time. The first occasion was the ground breaking, in 2009, in which the former president participated. By all accounts, Eko Atlantic represents a staggeringly ambitious undertaking: the dredging of millions of tons of sand from the sea floor off Victoria Island and the creation of an estimated 3.5 square miles of new land, on which the Chagourys aim to establish what they call a “21st century city … for residential, commercial, financial and tourist development.”

Mr. Clinton toured the Eko Atlantic site for the second time on February 21, 2013 – twenty days after his wife left the State Department – to celebrate the Chagourys’ reclamation of 5 million square meters of land, a critical juncture in the project.

Smiling and animated, Mr. Clinton was photographed conferring with Gilbert Chagoury and Jeffrey J. Hawkins, the consul general for the State Department in Nigeria. Twenty-seven days later, when William P. Franklin would order aides to begin exploring the acquisition of land from South Energyx, the Chagoury-owned company, Hawkins would be one of four State Department officials copied on Franklin’s email.

“A month after Bill Clinton visits a Gilbert and Ronald Chagoury-run land project in Nigeria, the U.S. State Department wants to buy the same land,” said David N. Bossie, president of Citizens United, the conservative advocacy group whose litigation against the State Department pried loose the Franklin email and accompanying letter. “Who could be so lucky? A major donor to the Clinton Foundation, that’s who.”

Queried by Fox News about the matter, the State Department said its officials had “prioritized” the search for a new consulate location in Lagos back in 2011 – when Mrs. Clinton was secretary of state – and that an “independent international real estate firm” had identified Eko Atlantic as a potential site the following year.

“Our site search process … is managed by career real estate professionals in the Bureau of Overseas Building Operations, with input from independent real estate firms and other department stakeholders,” said Elizabeth Trudeau, a State Department spokeswoman, at a briefing for reporters on Monday. “The department has had conversations with multiple property owners and their representatives about the possibility of acquiring property for a new consulate in Lagos.”

Trudeau could not explain why a “prioritized” mission had dragged on for five years without success, noting only that “acquiring property that’s appropriate” for a diplomatic facility can be “a long process.” Asked if Secretary Clinton had been aware of her department’s identification of the Chagoury-owned land as a potential site for a consulate, Trudeau replied: “I’m not aware she was.”

The Clinton campaign did not respond to a request for comment. Mark Corallo, a Washington-based spokesman for Gilbert Chagoury, said in a statement that given the project’s “state-of-the-art urban design,” including advanced telecommunications and security features, “it should come as no surprise that the United States government and other governments from around the world are considering Eko Atlantic as a new opportunity for locating their offices that operate in Lagos.”

John Bolton, a former U.S. ambassador to the United Nations and Fox News contributor, said the entire series of events involving the Clintons and the Chagourys appeared, at a minimum, poorly handled to insulate Secretary Clinton from conflict of interest charges.

“The impression left is that there’s favouritism involved,” Bolton said. “And it’s just very unusual in State Department real estate and housing transactions overseas to have this kind of focus on someone with such clear financial connections to even the departed secretary of state. Normally, there’s much more competitive activity involved, [of] which we haven’t seen any evidence from the State Department.”

Experts agreed the March 2013 email from William P. Franklin to Mary E. Davis, triggering the State Department’s letter to Ronald Chagoury for a possible real estate transaction, would likely have formed only one set of documents in a longer trail that would have dated back to 2012 – the year the State Department said Eko Atlantic had been identified as a potential site for a new consulate.

Such a trail would presumably include internal correspondence addressing the suitability of the Eko Atlantic site and, perhaps, flagging the potential conflict of interest that could be cited, given the longstanding ties between the Clintons and the Chagourys.

But Citizens United said no other documents on the consulate-scouting effort were turned over by the State Department. The group filed its initial Freedom of Information Act request with the State Department for records relating to Gilbert Chagoury back in 2014, and, receiving no reply, filed suit in U.S. District Court for the District of Columbia in April 2015.