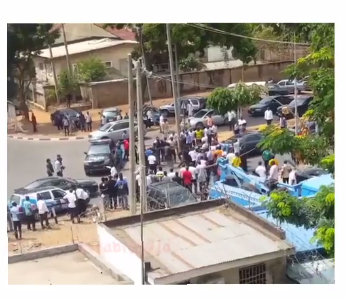 Clash Of The Titans: Hostage Taken As Police, Soldiers, FRSC Battle In Abuja

A hostage situation has been reported after a clash between soldiers and police officers attached to the Abuja Environmental Protection Board (AEPB) and officers of the Federal Road Safety Commission (FRSC), in Wuse Zone 7, Abuja, earlier today.
According to reports, the clash started when the AEPB task force members tried to serve the Road Safety office with a violation notice.

Soldiers and police officers with AEBP reportedly assaulted a female Road Safety marshal and escalated the confrontation, an allegation denied by the security agents.

They alleged that they were resisted from serving the Road Safety the notice they brought.

As a result of the heated clash, a soldier was reportedly wounded while a civilian staff of the AEPB was “taken hostage” by the Road Safety marshals, which spurred the soldiers and police officers with the AEPB team to seize a Road Safety officer.

According to the report, each side has refused to release their hostage unless the other side releases their team member first, resulting in a stalemate that has caused a traffic situation in the area.

Previous “Mad Man” Hacks Two Primary School Students To Death In Ogun State
Next LIFE AFTER DEATH: Billionaire pays to be killed and have his brain digitally preserved