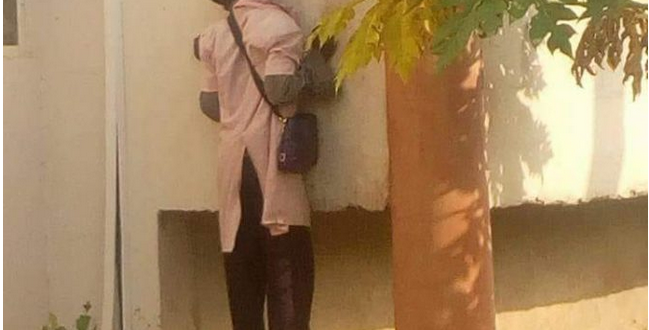 A 49-year-old civil servant in Ekiti State and father of five , Mr. Abolarinwa Olaoye, on Tuesday night,  hung himself  at the State Secretariat in Ado Ekiti, state capital.

His body was found, on Wednesday morning, hanged  with a piece of clothes to the  railing of a building at the Ministry of Education, where he had reported to duty  around 6:00p.m, on Tuesday.

It was gathered that the deceased was a night guard at the Ekiti State Scholarship Board.

The development had caused palpable fear and apprehension within the civil service in the state capital , as civil servants  clustered near the spot of incident and lamented the horrible fate that befell the man whom they described as jovial and amiable while alive.

A crowd of sympathisers crowded the scene of the incident and others from the old Governor’s Office, which was about one and half kilometers distance came around to catch a glimpse of the suspended body of the deceased.

A Boxer MB 100 brand motorcycle with Registration Number ADK 210 WS brought by the deceased to the office was parked within the building where the suicide took place.

The deceased, according to an in-law, Mrs. Elizabeth Babalola, also engaged in commercial motorcycle operation and farming to support his civil service work.

Olaoye, a native of Igogo Ekiti, Moba Local Government area of the state,  according to Mrs. Babalola, came to her around 4.30p.m, on Tuesday, and lamented the acute financial problems he had been encountering of recent.

Babalola , who is the deceased’s wife elder sister added, “He came to me around 4.30pm, on Tuesday, and started  lamenting that  his house rent was  due and that he could not pay due to irregular salary payment.

“He said he was also indebted to the government through housing and car loans he obtained.“He also complained about inability to meet other financial commitments to  his wife’s  family. “He told me he could go ahead and do some nasty. He told me clearly that he was tired of life.

“I tried to persuade him not to resort to anything nasty. I told him life is full of ups and downs and that he should just endure, but I never knew he would end this way”, she said.