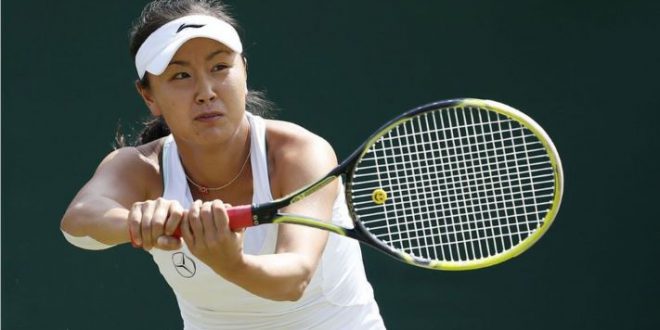 Chinese tennis star Peng Shuai on Sunday denied ever accusing anyone of sexually assaulting her.

Peng gave an “exclusive” interview with Singaporean outlet Lianhe Zaobao, during which she said she had “never said or written that anyone sexually assaulted” her.

“I have to clearly stress this point,” she said in the video, which Reuters translated.

Peng, 35, made headlines in November when she wrote a lengthy post on Chinese social media platform Weibo that alleged former vice-premier Zhang Gaoli forced her to have sex despite repeated refusals following a round of tennis three years ago. She further claimed Zhang’s wife guarded the door during the incident.

The post disappeared from her account, and China’s state-controlled media appeared to repress any reporting on the case. Peng also disappeared from public for two weeks after making the initial post.

International pressure from the Women’s Tennis Association (WTA) and tennis players resulted in a few limited appearances by Peng, posted by Beijing-backed news agency The Global Times and its editors.

FILE – In this file photo taken Monday, Feb. 24, 2020, Chinese Foreign Ministry spokesperson Zhao Lijian speaks during a daily briefing at the Ministry of

Foreign Affairs office in Beijing. China is threatening to take “firm countermeasures” if the U.S. proceeds with a diplomatic boycott of February’s Beijing

Winter Olympic Games. Zhao on Monday, Dec. 6, 2021, accused U.S. politicians of grandstanding over the issue of not sending dignitaries to attend the

Peng now calls the post a “private matter” and that people “have many misunderstandings” about it. She did not elaborate.

She claimed she has been living at home in Beijing without supervision and made no mention of Zhang.

Her original post, translated to English and posted by What’s On Weibo, detailed how Zhang and his wife took Peng to their home, where they had sex.

“I have no proof, and it would be impossible for me to keep any evidence,” her original post said. “You denied everything afterward (…) That afternoon I originally did not consent and cried the whole time.”

Peng may have maintained a relationship with Zhang otherwise, in the attempt to cope with what had happened, but it appeared to end on Oct. 30 after a dispute.

China only made one direct comment on the matter when Ministry spokesman Zhao Lijian accused “some people” of “deliberately and maliciously hyping [the issue] up” and suggested they no longer “politicize” an issue that Beijing saw as “not a diplomatic matter.”

Peng in her new post mentioned an email she allegedly sent to WTA head Steve Simon, in which she also denied any allegation of assault. Simon said that he “had a hard time believing” she had written that email.

She provided few opportunities for interviews or communication with Western news outlets and organizations, but the International Olympic Committee on two occasions held video calls with Peng, during which she assured them of her well-being.