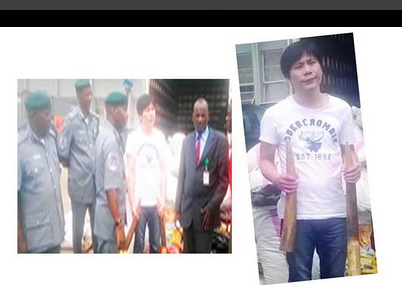 A of the Nigeria Customs Service (NCS) has intercepted sacks of elephant tusks and pangolin shells in a warehouse at No. 38, Ogundana Street, Off Allen Avenue, Ikeja, with a combined Duty Paid Value (DPV) of N493.5 million.


The unit also arrested a Chinese suspect, Mr. Ko Sin Ying, in connection with the items whose export breaches international protocols and conventions.

He disclosed that the team, acting on intelligence, had mounted surveillance on the area and on a tip-off, raided the apartment where the security confirmed the occupant to be a Chinese national, Mr. Ko Sin Ying.

Garba noted that the export of such endangered species of animals like elephant and pangolin breaches international protocols and conventions.
According to him, the United Nations Charter on the Preservation of Endangered Species entails that Customs administrations globally protect wildlife by intercepting illegal trade on such animals.

“It further prevents the killings of endangered species since the tusks are only available after the killing of the elephant or pangolin,” he said.