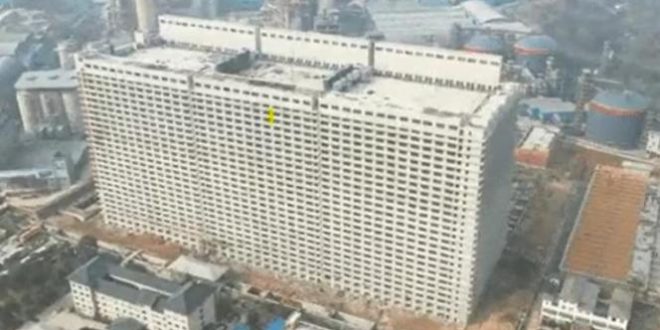 The 26-storey pig farm in Ezhou, Hubei province, is one of China’s most modern pig-breeding operations

The world’s biggest single-building pig farm has opened in Hubei province, but critics say it will increase the risk of larger animal disease outbreaks

On the southern outskirts of Ezhou, a city in central China’s Hubei province, a giant apartment-style building overlooks the main road. But it is not for office workers or families. At 26 storeys it is by far the biggest single-building pig farm in the world, with a capacity to slaughter 1.2 million pigs a year.

This is China’s answer to its insatiable demand for pork, the most popular animal protein in the country.

The new skyscraper-sized farm began production at the start of October when the company behind the facility – Hubei Zhongxin Kaiwei Modern Farming – admitted its first 3,700 sows into the farm.

Zhongxin Kaiwei is a newcomer to the pig sector – and farming. It started out as a cement investor, with multiple cement factories in provinces such as Hubei and Henan. One of them, Hubei Xinshiji Cement, is next to the new pig farm.

The company has said that it originally planned to invest in ready-to-cook food production, but that it changed its mind after a slump in the cement and construction industries in China. Jin Lin, the general manager of the company, has said that the company saw modern agriculture as a promising sector and an opportunity to use its own construction materials to build the pig farm.

According to statements on the company’s official WeChat account, the pig farm has two buildings. Behind the operational site, an identical-looking building of equal scale is nearing completion. When fully running, they will provide a combined area of 800,000 sq metres of space, with the capacity for 650,000 animals.

The 4bn yuan (£473m) farm has gas, temperature and ventilation-controlled conditions, with animals fed through more than 30,000 automatic feeding spots at the click of a button in a central control room.