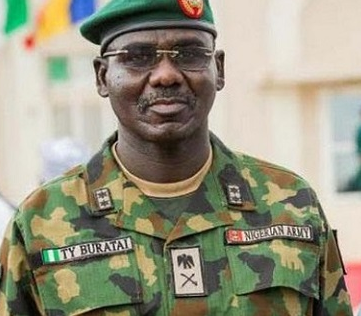 A statement by the spokesperson of the Nigerian Army, Brig. Gen. SK Usman says the Army Chief’s dad died in Maiduguri today. Here is the statement below:

Inna lillahi wa inna ilaihirrajiun. This is to inform you of the passing away of the father of the Chief of Army Staff, Alhaji Yusuf Buratai this morning in Maiduguri.”Brig Gen. Usman said.

A family source said Buratai’s father had a successful surgery in the University of Maiduguri Teaching Hospital, UMTH but gave up thereafter. The deceased is survivced by 14 children, including the chief of army staff and many grandchildren.

He was also a military personality having been a non-commissioned officer in the West African Frontier Force.